He’s an established artist, she is taking her first steps in the art world. “A Heart of Love” by Łukasz Ronduda is the story of Wojtek Bąkowski and Zuzanna Bartoszek. It’s a melodrama that weaves together fictional and documentary elements. “They both turn their tribulations in love and life into art – her installations and his performances. It’s just a question of who uses it first,” said the director at the premiere of his latest film. 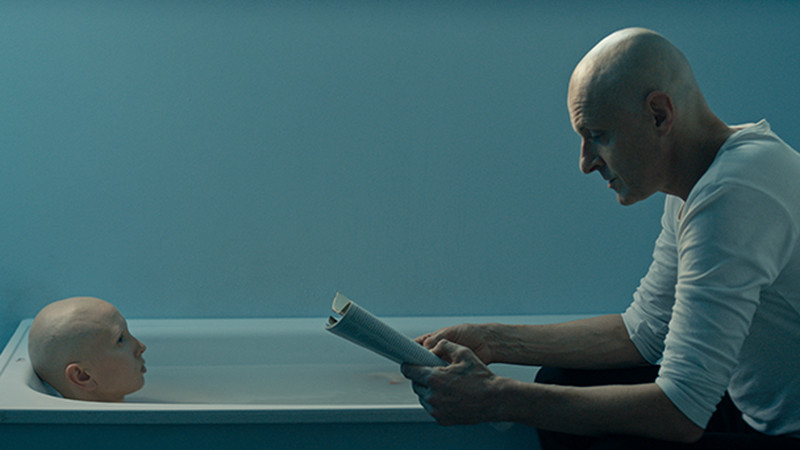 Jakub Demiańczuk: Your first film, “Oskar Dawidzki in The Performer”, was emblematic of a phenomenon that you, along with Jakub Majmurek, dubbed “Film-art”. “A Heart of Love”, though set in the art world, goes in a slightly different direction.

Łukasz Ronduda: “Film-art” is a hybrid creation. “Oskar Dawidzki in The Performer” combined the realities of art and cinema to a point where they were actually fighting each other. This time, I wanted art to be subjected to the plot, to emotions, to everything that I wanted to say about love and relationships between two artists. “A Heart of Love” grew out of that phenomenon, but it’s a film that can exist autonomously within the realm of cinema.

It’s still an arthouse film, but at the same time, on a very basic level, a genre one – a melodrama about love being destroyed by art and ambition. You toy around with genre clichés. In a stereotypical melodrama, the hospital scene ends with news of the impending death of one of the protagonists. In “A Heart of Love”, it’s a key scene for understanding their relationship, but doesn’t really act as a turning point, plot-wise.

We were even talking about shooting a melodrama on set, and there’s a quote from “The Quack” in the movie… But in a classical melodrama, the obstacle comes from the outside. Here, we have a couple who fights the obstacles inside them. Fights with something that is drawing them together, but also destroying the relationship from within.

How did you come to make this film?

After “Oskar Dawidzki in the Performer”, I was looking for a topic, and Wojtek Bąkowski had always seemed very cinematic to me. He’s extremely chariamsatic and an all-around fascinating character. In Poznan, back in the Penerstwo days, he was a classic hoodrat, the king of the hill. When you visited him, he’d take you around the neighborhood, showing you these incredible hidden treasures in stairwells, or 10th floor vistas of glimmering lights on the horizon. But his biography alone wasn’t enough for a film. That is, until he became involved with Zuzanna. I had already been working on a script with Robert Bolesto, and both of us noticed their similarity – not just physical, but also spiritual and emotional. We felt that it would give us an opportunity to say something about contemporary emotions. This peculiar twin-like nature of Wojtek and Zuzanna, their mutual adhesion, became for us a symbol of love in times of narcissism. A pretext to ask: do we love someone because they fulfill some need of ours? Or maybe also because they’re a reflection of us? And would we even be capable of loving someone extremely different from us?

They both worked closely with you on the script.

“A Heart of Love” was born at the intersection of fiction and documentary film. Robert Bolesto based all scenes on actual events from their life, on their conversations. The starting point was always factual. It’s a very difficult situation: observing reality and relating it nearly verbatim. It influenced the film, but at the same time the plot influenced reality. They overlapped. I’ll give you an example: in the film, Zuzanna takes part in a group exhibition created specifically for the movie. And as we were premiering the film in Berlin, the real Zuzanna was opening her exhibition at the Museum of Contemporary Art. As if both of them – the cinematic one and the real one – were neck and neck. They were making their public debuts at the same time. This proximity of life and creation always fascinates me. “Oskar Dawidzki in The Performer” was also like that. One of my points of reference was definitely Grzegorz Królikiewicz’s “Case Pekosinski” and the creative documents of Wojciech Wiszniewski, but my film mashes together fact with fiction in a different way. And for Zuzanna and Wojtek, this was more than a mere movie. It was like a life project, a process of self-discovery through which they were able to better define themselves.

Justyna Wasilewska in „A Heart of Love”, dir. Łukasz Ronduda

Didn’t you think of casting them in the film? Or would that be too close to “The Performer”?

During the production, they had to really trust us to be able to confide in us and tell us these intimate stories. We wanted to avoid that which Krzysztof Kieślowski called the fear of real tears. At some point you come to the conclusion that you need to use fiction in order to tell the truth about real people. That you have no right to subject your protagonist to such stress, to force them to live their deepest truths in front of a camera, because it’s unethical. Jacek Poniedziałek worked on this character for a long time to make it more believable. He got deep into the process of mimicry, watching the way Wojtek moves and talks. He got obsessed with it. But once we started shooting, it turned out that it wasn’t working. It seemed fake, and made this cinematic version of Wojtek into some sort of puppet. We decided to drop it, and I gave Jacek free rein in creating this character – though of course drawing on what he’d already practiced. And just when we thought that we’d really gone off, that’s when Jacek became Wojtek. It was like this cinematic alchemy at the intersection of fact and fiction.

And did Wojtek and Zuzanna had any say in how the finished product turned out, besides the script?

They were always present on set. We consulted them on every step of the way, practically until the last round of editing. Often the things that didn’t seem that important to me turned out to be vital for them. Like the question of style and appearance. That’s why in “A Heart of Love” we see such unusual fashion, and voguing, which you don’t really see in Polish films, and which is an important communication code for young people. Someone able to read that code will have an additional key to interpreting the film and understanding the characters.

It’s a dance based on pictures from fashion magazines such as “Vogue”. You dance like you’re a model presenting clothes and jewelry. It comes from 1980s Harlem’s gay underground. For poor African Americans with no social mobility, vogue balls were on one hand a show of defiance, and on the other an attempt to mark their aspirations. They became these beautiful, rich people and, for a moment, could feel like someone completely different. Later, Madonna used the dance in her video for “Vogue”, bringing it into the mainstream. Now it is popular among young people in Warsaw. It has lost its emancipatory context, but it is important culturally, especially for a young woman who is still looking for her true identity and doesn’t know yet who she would like to be. The only thing she knows is that it’s someone else. An equal partner? An independent artist? Voguing can make you feel greater even in your own eyes. Just like on Facebook, or Instagram, you’re more perfect than in reality. As a subculture, it’s an excellent commentary on the era of social media. Because “A Heart of Love” is also a movie about the regime of public image. About the fact that we have to keep producing ourselves anew.

Wojtek and Zuzanna’s relationship quickly becomes overwhelming for them. Also because they’re competing with each other as artists.

They both turn their tribulations in life and love into art – her installations and his performances. It’s just a question of who uses it first. We live in a confessional time, the line between private and public is getting blurrier by the minute, everything’s being exposed. Unfortunately, art trumps love.

They look for inspirations in shopping malls, among other places. When Zuzanna Bartoszek revealed in “Gazeta Wyborcza” that she spends her free time at the exclusive Vitkac shopping center, the Internet exploded with righteous rage.

It should be noted that this was a debate about a girl. Polish society finds it incredibly easy to attack young women. As if there was some code that defined what a young girl can, and what she cannot do. And it being definitely a lot less than what a young guy can do. On top of that, everyone seems to feel like they can lecture young women. An independent, self-reliant girl inspires aggression. 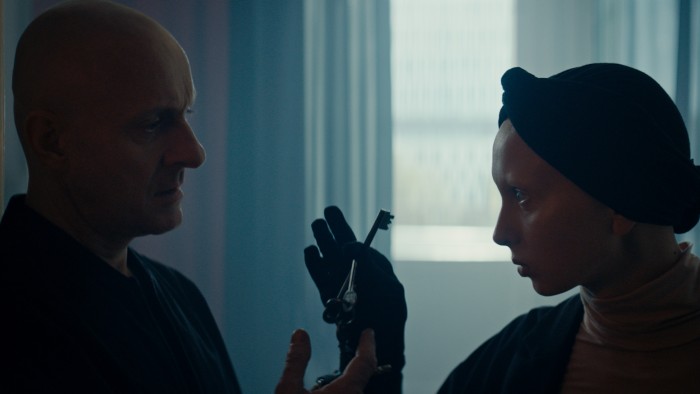 “A Heart of Love” fits right into the current discussion about the treatment of women sparked by the #metoo phenomenon.

Because it’s a story of a girl’s emancipation from a relationship with a domineering partner who acknowledges certain rights, but would also like to break them. Of course, Wojtek is infatuated with Zuzanna, but he has no qualms about stealing her ideas for his own art. He wants to mine her youth, her connection to the culture of young people. But she also starts drawing from him, wrestling more space for her in the relationship. We premiered this film in Berlin in February, so “A Heart of Love” was being interpreted within the context of the Black Protest. The German audience saw it as a tale of women’s emancipation in Poland. I am fascinated by the independence of my protagonists. I like the fact that they’re creating themselves in any way they want. Like Miron Białoszewski, they are inspired by trivial events, such as a visit to a shopping center. And in Poland, we feel scorn for everyday banality. Everyone wants epic accomplishments. Everything’s supposed to be larger than life.

Studies show that in Poland, people identify only with their immediate family, and then with the nation, and God. There’s nothing in between, like a sociological vacuum. It is slowly being filled, by urban movements for example, but they’re still peripheral. Being interested in the everyday and the banal, which my protagonists are, turns out to be something dangerous in our country, or at least something worthy of scorn. Because people can’t just live their lives. And the current government only reinforces this. Telling us that war is coming, so we’ll finally be able to sacrifice ourselves and finally imbue our worthless existence with some sort of meaning.

read more about “A Heart of Love”