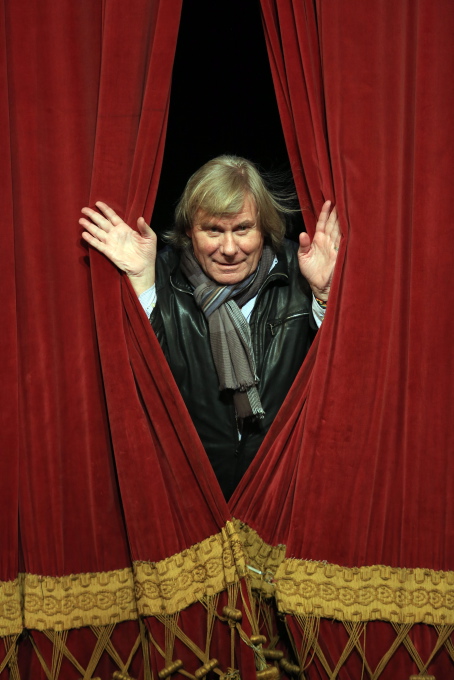 One of the most charismatic Polish directors. His psychological drama “Aria for an Athlete” (1979) won the Best New Director Award in San Sebastián and Gdynia. Granted multiple times, including Special Jury Prize in Gdynia for “The Magnate” (1986) and “Poznan 56” (1996). In June 2016 he finished filming „Kamerdyner”, an epic tale about multicultural past of Kashubia, borderland between Poland and Prussia, that will be released in 2017. For many years a lecturer at Lodz Film School.

Maciej Stuhr once called him a contrarian kid by nature. The reason becomes clear at the first encounter, at the first glance at his movies – Bajon changes conventions and registers, fluidly switches from major historical productions to low-key psychological films, tries to cast seemingly overused Polish literary classics in a new light. When directing movies wears him out for a time, he can go back to stage direction, because he’d never given up his ties to theater. He can also start writing again – he’d already successfully tried his hand at prose, receiving the Wilhelm Mach Award for best literary debut. His films are lavishly, generously made. No wonder The Magnate was likened to The Leopard, and Bajon was considered Poland’s potential Fellini or Luchino Visconti.

I must admit that every once in a while I like to refresh my memories of this particular Bajon movie. Every time I’m seduced anew by the story of the von Pless princes set against an early 20th century background. Bajon merges his grand perspective with incisive portraits of his protagonists, each outlined in a different style. The youngest, Bolko, played by Bogusław Linda, teems with the rage and rebellion of youth. Franzel (Olgierd Łukaszewicz), the eldest, tries to keep a tight rein on the family business. There’s also Conrad (Jan Englert), masking his homosexual tendencies with sensitivity and emotional agitation. Let’s not forget the most important of them all – the head of their family, magnificently portrayed by Jan Nowicki. The finale of The Magnate, showing the headstrong youngest son embracing his old, wheelchair-bound father, is so striking not just because of Nowicki and Linda, but also thanks to Bajon’s masterful direction. He doesn’t pull his punches, remembering that movies are a spectacle most of all – they have to grab us by the throat.

Teaching in film school in Lodz and Katowice allows him a broader view
of young people’s opinions about film,
of their interests and greatest hopes

Born in Poznań in 1947, Bajon amassed a portfolio so thick that it’s hard to mention all its highlights in a short essay. He frequently points out his fondness for his hometown, saying he stayed there; Poznań ’56, his take on the June protests, proves the truth of his claim. Bajon recalls that the bloody uprising was centered on his neighborhood, the place where he used to play war games as a kid. When he stood in his doorway and saw a tank, he felt that a real war was beginning. Maybe that’s why he decided to tell the tale through the mouths of 12-year-olds and filmed the riots from a distance, through gates barely cracked open; his intentional eschewing of a martyrological dimension makes this movie different from stereotypical portrayals of heroism.

Poznań ’56 received mixed reviews. It was indeed the widest-debated Polish film of its time (1996). Naturally, its point of view overlaps with Bajon’s own perspective – he’s never been shy about openly declaring his views. For example, as he emphasized his attachment to Poznań, he unflinchingly criticized the city’s hypocrisy with regard to the sexual abuse scandals of Archbishop Paetz and Wojciech Krollop that galvanized public opinion.

Even before Bajon got his law degree at the Adam Mickiewicz University in Poznań, he was admitted to the Lodz Film School’s direction department. His life had gone full circle several times: he went on to become one of the most important lecturers at the Film School, then served as Dean of the direction department in the 2008-2016 period. He still works there, as well as lecturing at the Faculty of Radio and Television at the University of Silesia in Katowice. This allows him a broader view of young people’s opinions about film, of their interests and greatest hopes. Bajon swears that he makes use of this knowledge while planning new movies in his present job as the head of Studio Kadr. Under Bajon’s leadership, Kadr will produce Jakub Panek’s (Daas) latest work and Kuba Pączek’s debut.

Bajon’s debut feature brought him into the world and strongly affirmed his identity as an unusual director. Aria for an Athlete was far removed from the 1970s’ de rigueur “cinema of moral anxiety” movement, which strove to accurately reflect reality in a critical fashion. Cinematographer Jerzy Zieliński saturated the tale of the wrestler Góralewicz (Krzysztof Majchrzak’s first acclaimed role) with bold hues while Bajon intended to shape a new world, believing that the director is destined to do this as a demiurge. Then came the comparisons to the greatest masters, like Federico Fellini or Ken Russell; Bajon had never tried to conceal his inspiration with the works of the author of Amarcord. His movies also contain visual references to many artists, for example to Toulouse-Lautrec.

His mercurial interests were reflected in his subsequent movies. Inspection of the Crime Scene 1901 depicts the schoolchildren’s strikes in Września without resorting to national emotionality and pathos. In Limousine Daimler-Benz, the almost tangible premonition of the approaching horrors of war clashes with a close shot of the young protagonists wishing to achieve their dreams and aspirations in an uncertain world. Made for TV, Shilly-Shally featuring an excellent performance by Janusz Gajos, was different still: a low-key, four-character chronicle of a family at an impasse, it turned out to be a depressing reaction to Poland shortly before the martial law. The movie won several awards at the Polish Feature Film Festival, then held in Gdańsk, and premiered on December 11, 1981. A significant coincidence indeed.

Over the next decades Bajon went through different storytelling conventions, from political phantasmagoria (The Ball at the Koluszki Junction), through TV comedy staged more like a play (Sauna), to attempts at describing the period of political transformation in Poland (Better to be Pretty and Rich, The Foundation). He took on literary classics, checking how Żeromski’s idea of houses of glass would sound in our times (The Spring to Come) and injecting new, youthful energy into Fredro’s Maiden Vows. He also created a continuation of a well-known story in his latest completed movie, Damaged.

Filip Bajon is currently working on Kamerdyner, the saga of Poles, Germans, and Kashubians living togther in the Puck region in the Polish-German borderlands of 1900-45. The project has a stellar cast (Anna Radwan, Janusz Gajos, Adam Woronowicz) and promises a creative repeat of The Magnate. We can still whet our appetites for Bajon’s next projects while waiting for this movie – the artist doesn’t intend to slow down. He already has a screenplay about Filippo Brunelleschi, an early Renaissance architect, and wants to tell the story of Jarosław Iwaszkiewicz’s early years. He’s always on the move.

1993 Better to Be Pretty and Rich (feature film)

1991 The Repetition from Conrad (documentary)

1989 The Ball at the Koluszki Junction (feature film)

1997 The Repetition from Conrad

Head of Cinematography Award for Best Feature Film for year 1986