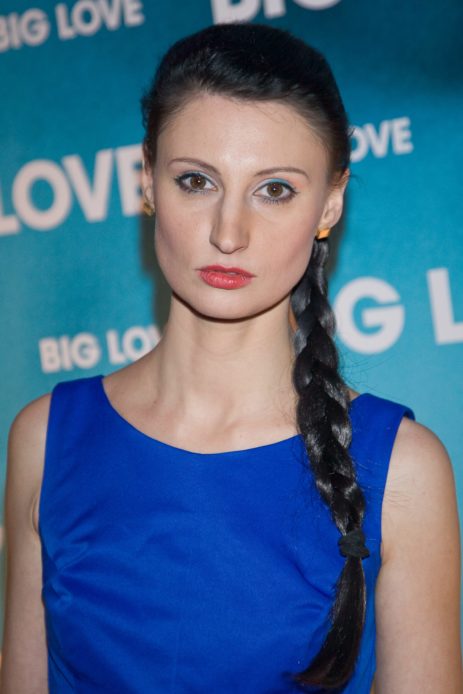 Her full length debut film “Big Love” (2012) was on the top of Polish box office and was nominated for Golden Duck, award presented by the monthly “Film”, for directing and screenplay. Under the program “Russia–Poland. New Gaze” she made a documentary “Moscow Wife” (2005), that was shown at multiple festivals all around the world. She received HBO Award at 55. Cracow Film Festival for a project of the film “The Divines!”. Since 2014, she’s been the President of the Female Filmmakers Association

About her feature debut “Big Love” she said: „It’s an insolent film that divided the audience and critics into two extreme camps – those who absolutely loved it, and those who hated it”. It’s true, films don’t often elicit such intense emotions

Białowąs has made both feature films and documentaries. Already at university, the aspiring director created vivid, original etudes that received awards at national film festivals (“Pielęgniarz”, 2003, “Dzika plaza”, 2004, or the Polanski-esque short film “Ewa skacz!”, 2004, with the spectacular, ephemeral Agata Buzek). Her diploma work “Landryneczka” (2005), which was an early indicator of the director’s skill in constructing sensuous psychological games, received a special mention at the Off/On European Film Week in Warsaw, as well as the audience award (Golden Horseshoe) at the Wakacyjne Kadry Film Festival in Cieszyn.

In 2015, she received the prestigious HBO AWARD for the project “Boskie!” at Doc Lab Poland. She has been developing that documentary film for the past few years.

One of the most interesting projects in Białowąs’s filmography remains undoubtedly her documentary “Moscow Wife” (2005), co-produced as part of the international project “Poland – Russia. A New Look” The film tells the story of Wiktoria Markina, the attractive wife of a Russian oligarch. With each new scene, we find out more about her history and her crushing loneliness that cannot be assuaged by the opulence with which she is surrounded.

The director, without passing judgment on her subject, subtly creates a portrait of a woman with an equally rich inner life – an incredibly creative person who loves art (especially cinema). Wiktoria uses her privilege to express herself artistically, at the same time formulating original ideas on the condition of art in contemporary world. Białowąs managed to establish with her a deep connection that harmoniously develops before our eyes. And how could you not like a person who professes that “In life, you also have to do dumb stuff, you need to give yourself a chance to make some mistakes.”

In cooperation with the Polish Film Institute and the Munk Studio (2009), Białowąs was given an opportunity to direct one of Munk’s so-called thirties, and it was one she took full advantage of. “Moja nowa droga” is an insightful study of a conflict between generations and values, and an attempt to present the mental condition of contemporary Poland. A family’s dinner table confrontation becomes a tragicomedy space in which we feel equally amused, unsure, and lost as the protagonists: Piotr and Alina (the excellent Roma Gąsiorowska and Michał Sitarski). “Moja nowa droga” was noticed at two of Poland’s main cinematic events that promote young talented artists – the Gdynia Film Festival (during the Young Polish Cinema competition), and the Film Debut Festival in Koszalin (The Mały Jantar award for the best short film).

In 2012, Białowąs directed her first full-length feature film “Big Love” starring Aleksandra Hamkało (award for the best debut at the Debut Film Festival in Koszalin) and Antoni Pawlicki (the Piotr Łazarkiewicz Award for Young Talent at the Polish Film Festival in Los Angeles). The long-awaited debut, which presented an unconventional look at the topic of toxic addiction to love and to another person, was deemed one of the most controversial films of the season. “Big Love” was awarded in Chicago at the Polish Film Festival in America, among other places. The project was mentored by the legendary director Janusz Morgenstern, and it is dedicated to his memory.

“I made an insolent film that divided the audience and critics into two extreme camps – those who absolutely loved it, and those who hated it (…) I was surprised to see how many people identified with the protagonists, how many had experienced toxic love. Many people told me that I made a film about them” – the director told interia.pl in 2012, in an interview from the set.

Already at university, she shot original and vivid etudes. Her short film “Ewa Skacz” referenced the style of Roman Polański

In 2015, she received the prestigious HBO AWARD for her project “Boskie!” at the Doc Lab Poland which took place during the 55th Krakow Film Festival. Over the past few years, the director has been developing this film. She shares directorial duties on this ambitious undertaking with Katarzyna Trzaska, author of internationally acclaimed “10 lat do Nashville” (2009) and “Maksimum przyjemności” (2013).

“Documentaries teach you patience,” says Białowąs. “We’ve been developing “Boskie!” for nearly three years now. But in this case, time is key, essential even. Our protagonists are strong and uncompromising, the art they do is basically time sculpture. It is an art that is sometimes difficult, or even incomprehensible to the audience, it’s provocative art devoid of inhibitions and insecurities. The protagonists hardly ever receive assistance from the state: they mostly have to rely on themselves. But after all they aren’t just artists, they’re also women who have to make a living.

The titular Boskie (Divines) are Polish artists involved with contemporary and conceptual art, video art and performance: Ada “Adu” Kaczmarczyk, Dominika Olszowy, and Maria Toboła (who have at one point done performance art under the moniker Cipedrapskad). The premiere of this HBO-supported documentary is planned for 2018. Additionally, Białowąs is also working on a TV Theatre play, and a documentary film about Ignacy Daszyński.

“I’m interested in both a study of the role of artists in contemporary society, and in examining whether there’s room for a private, homespun existence in the lives of such courageous, innovative individuals,” says the director. “How does it manifest itself? And how do these women maintain their independence in this space. They work diligently, dreaming of success and recognition that they doubtlessly deserve, but success in their field isn’t measured in commercial categories, it’s a completely different world. I’m glad that moviegoers will be able to take a look at them and learn about these incredible artists. In a broader sense, it is a film about finding the balance between ‘to have’ and ‘to be’”.