Film and theatre director, actor, screenwriter. His short documentary “Drawn from Memory” (2011) was shown in Directors’ Fortnight section in Cannes. For widely discussed debut feature film “Walpurgis Night” (2015) about romance between aging diva and young journalist he received an Award for Longest Applause in Gdynia and multiple prizes at Koszalin Film Festival for Young Cinema.

If you ask him about movies, you better have an hour to listen. Or even two. “Well, I’m a cinema fan,” Marcin Bortkiewicz laughs. When it comes to art, he simply can’t give up. He wouldn’t have become an artist if not for his determination

He comes from difficult circumstances. The day after he was born in Słupsk on January 27th 1976, his parents’ divorce papers arrived in the mail. “A few years later my mother said: You’ll meet your dad today”, he recalled. “On our way there I kept asking Is it him? about every person we were passing. He finally stood before me – and criticized me for something right away. I couldn’t open up to him. We only got back in touch recently. Too late.”

Bortkiewicz grew up surrounded by women. His mother was 20, studying for her delayed high school finals, and worked hard to make ends meet. She used to be a waitress, nurse, and switchboard operator. His grandma took early retirement and ruled the household with an iron fist. Images resembling scenes from Almodovar’s Volver registered in the boy’s imagination: grandma would take him to the cemetery where he’d carry water and listen to aging women talking about life as they scrubbed their relatives’ gravestones.

He remembers scenes straight out of Almodovar’s “Volver”. Grandma ruled the household with an iron fist. They went to the cemetery where he listened to aging women talking about life.

He caught the movie bug from the TV. “I watched whatever was on – old comedies, Laurel and Hardy, Charlie Chaplin. I still see Chaplin as the most perfect example of art,” Bortkiewicz said. “Back then I didn’t even know that cameras existed – I was certain that cinema was a slice of real life.”

Many years later his mother borrowed Polański’s autobiography from the library. This book had a great impact on Bortkiewicz’s life as he read the following phrase: For as far back as I can remember, the line between fantasy and reality has been hopelessly blurred. He realized that described his perception of the world as well; he’d always sought to express his feelings – from singing to drawing, from storytelling to photography. Bortkiewicz decided to bring all these passions together and study film direction. 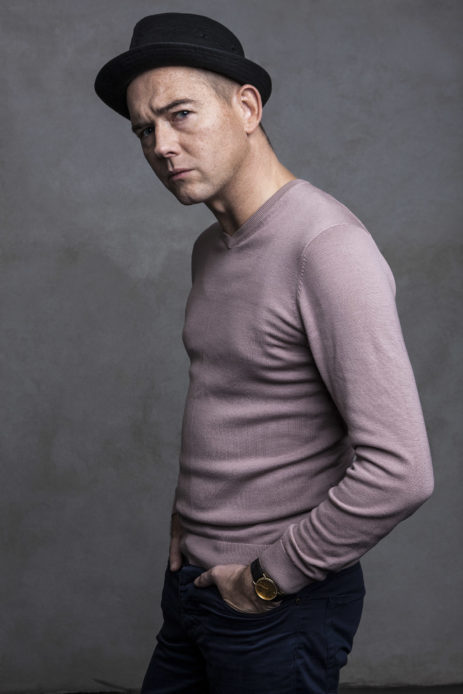 He showed up at the local drama center. Stanisław Miedziewski, a film school alum working at the center, gave him a bit of advice: “The most important part of directing is leading the actors. Try acting to begin with.” And another: “A director has to be an erudite, needs to know not just what Camus wrote, but why.” And so Bortkiewicz discovered the French existentialist.

He went into stage acting, appearing in Wieczory Witkacowskie. He also joined a film debate society, read archival issues of the Kino cinema magazine, and started watching movies on video. Even if he didn’t always understand them, he claims he was fascinated by their style, imagery, and mystery.

Bortkiewicz didn’t get admitted to film school, so he went on to study Polish philology in Gdańsk, which allowed him to take a cheap train home for weekends, eat with his family, and stock up on vittles for the next week. He supported himself with monodramas and theater adaptations.

“It was an excellent lesson of building suspense and drama,” he said of that period. “I learned to listen to my audience: what makes them yawn, lose focus, or wait for a turning point or a contemplative moment. It was simply live editing.”

He could’ve kept doing this, but the dream of filmmaking still smoldered in his heart. In 2003 he was accepted to the Andrzej Wajda Master School of Film Directing for the first edition of its documentary workshop. He made his first student film, Cisza, during the course, then went on to direct The Rules of the Game.

“In 2007 I decided to quit stage acting. It made me lose focus – taking on a couple of roles would cost me three monts. I gave 11 years to that profession,” Bortkiewicz recalled. It was a brave step – especially since he already had children. He owes much to his wife who accepted of his pursuit of a challenging dream.

“Drawn from Memory” depicted a woman with Alzheimer’s disease. Almost a year later its producer got an e-mail from the Cannes Directors’ Fortnight section. They qualified for a screening and the thirty-minute short got a new lease of life

After his documentary debut Early Learning, Bortkiewicz directed a short film for the Dekalog 89+ series. He asked an old friend for help with this project. “When I was 15, I met Sebastian Petryk in winter camp. We rode home together,” he recalled. “Later on I met his girlfriend and we started hanging out. We went to see Rosemary’s Baby together and became fascinated with moving pictures. Sebastian suddenly joked: Okay, I’ll become a producer and you a director. And we did. Sebastian, who already had filmmaking experience, produced Sublokator.”

Bortkiewicz knows how to get close with people. Illustrating the commandment “Thou shalt not commit adultery,” Sublokator examines the relationship between a mother, a daughter, and a boy subletting a room in their flat. His next movie, Drawn from Memory, tells the story of a woman with Alzheimer’s disease falling into the depths of illness and her internal world. The movie went unnoticed for a long time; then, almost a year after its release, the producer got an e-mail from the Directors’ Fortnight (La Quinzaine des réalisateurs) in Cannes. Drawn from Memory qualified for the section and the thirty-minute short got a new lease of life, opening Bortkiewicz’s way to feature films.

Artists are probably his favorite subject. His debut depicted a singer: an aging woman is being interviewed in her dressing room by a journalist as their impassioned conversations on art and life resurrect the demons of World War Two and Holocaust in black and white. Both Drawn from Memory and Walpurgis Night featured amazing performances by Małgorzata Zajączkowska – an actress unafraid to look possibly unattractive on screen in her fiercely authentic portrayals.

And what’s Bortkiewicz up to? He keeps depicting creative people. His documentary Left Side of the Face follows a photographer. The director is also preparing a new production: a poet, staying in a remote bed-and-breakfast, finds out she was awarded a substantial prize.

An ordinary guy from Słupsk who took a somewhat round-about way to filmmaking produced an impressive debut and became an acclaimed director. Bortkiewicz has his own vision, a tendency toward intentional overexaggeration and playing with conventions, but it’s coupled with significant cinematic erudition. I asked him about the time when he first felt professional satisfaction. “True satisfaction? At the Koszalin festival,” he replied. “After the first public screening of Walpurgis Night, the audience gave a standing ovation. It was beautiful.”

2013 Left Side of the Face (documentary)