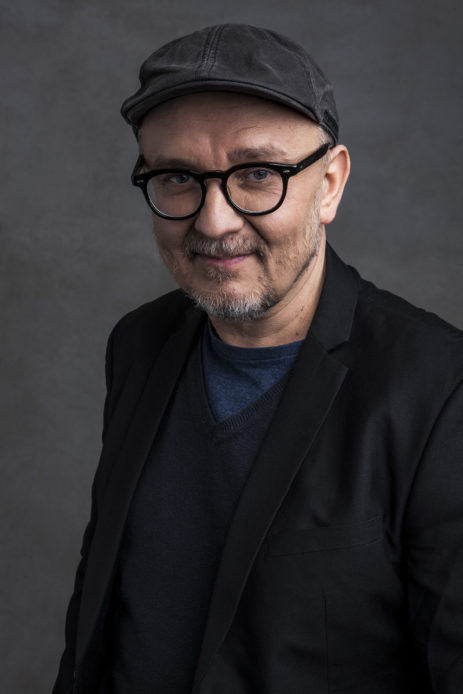 Film and theater director, screenwriter, producer, for many years head of Andrzej Munk’s Studio. He firstly draw attention with the movie “AlaRm” (2002), for which he received the main award at Koszalin Film Festival for Young Cinema. His debut feature movie “Warsaw” (2003) won a Golden Lion in Gdynia. For “Strange Heaven” (2016), a story about Polish immigrants in Sweden, gained the main prize at Cracow Film Festival. Member of European Film Academy.

Motion, migration, culture clashes – these are the keywords of Dariusz Gajewski’s works

“I see travel as a metaphor of self-discovery,” he says. “Our nation found itself face to face with the world after 1989; we used to have an idealized vision of the West, but it turned out that the reality was much more complex than we thought. I’m fascinated by the clash of Polishness with different lifestyles and alien mindsets.”

His Warsaw follows people from rural communities meeting in the capital of Poland. His other movies show Poles running up against unfamiliar cultures – Viennesse in Mr Kuka’s Advice and Swedish in Strange Heaven. Gajewski painstakingly documents the differences that freeze the lines of communication in challenging situations. How should we rise above them to communicate and build communities? “We’re living in historically significant times,” he states. “We’re reorganizing every aspect of life here in Europe without talking about it at all: our car barrels into a curve at a breakneck speed, tyres squealing, and we don’t even know what lies ahead. We all have a hand in shaping the future, after all. That’s why I think the time for meaningful statements is now.”

Gajewski painstakingly documents the differences that freeze the lines of communication in challenging situations. How should we rise above them to communicate and build communities?

Born in 1964 in Częstochowa, the site of Poland’s most important shrine, he grew up immersed in the omnipresent clash of ideologies. He remembers looking out of his window in the coarse, grey Socialist times to watch approaching pilgrimages. At first they were colorful crowds of peasants banging out rhythms with their staves, modernizing later on as loudspeakers started to appear. Nearby stood the bungalows of those few who made it big – by the standards of these times. The pall of the regime hung over everything. This was also the world of the punk alternative, young people rejecting the pervasive greyness of Communist Poland. “Paradoxically, it was possible to find freedom in this limited setting,” he recalls. “I had a large group of friends, about 50 people, who didn’t want to live in that shitty reality. Instead of waiting for it to offer us something different, we made it ourselves. We created art and traveled all across the country.”

Gajewski quickly realized that playing in a band wasn’t for him. He’d always loved shooting short films with his 8mm camera – or rather, a 2x8mm specimen of Soviet technical prowess. But he never abandoned his punk roots, revisiting alternative culture in his 1990s TV show Alternativi and later in Nie bój, nie bój, a portrait of anarchists in the Alternative Society movement.

Gajewski borrowed a film camera from a stage magician who brought it from the States to practice his tricks. He used it to shoot Bóg, diabeł, dziad i baba, a documentary about rural mythology, that also chronicled the challenging love of an old married couple. This movie yielded him a place at the Lodz Film School. 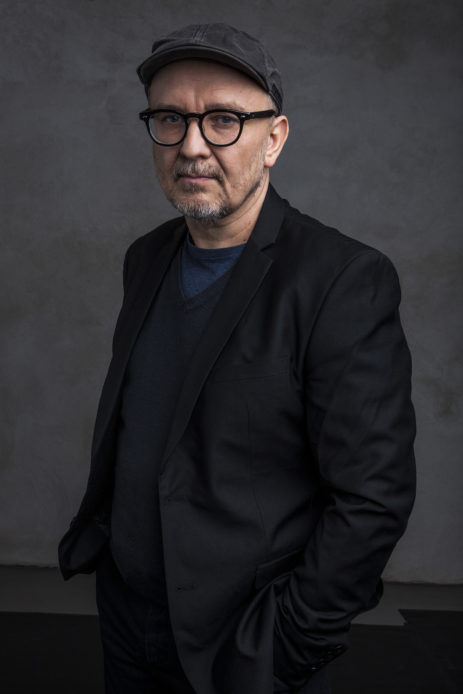 The times were as fascinating as they were difficult – Gajewski began his studies in 1989, a turning point in Poland’s recent history, and graduated when Polish cinema, deprived of a system of financing, was in critical condition. He worked for television, shot documentaries, and presented his screenplay for Warsaw to scores of producers. Desperate, he produced Alarm based on Helmut Krausser’s play Leatherface, relying on the kindness of friends to shoot it on a shoestring budget. Awarded the main prize at the Koszalin film festival, Alarm cleared his way to Warsaw.

The movie he spent years fighting for gained acclaim at the Gdynia Film Festival. The Golden Lions surprised him, catapulting the rookie director from obscurity to front pages. Polish cinema had been short on new artists and visions; Warsaw was greeted as a new, fresh voice. Gajewski, a total outsider, created a mosaic of stories about people who, like himself, arrived on Warsaw’s Central Station with a single suitcase and no idea how to make the first step toward their new life. Gajewski followed several protagonists stumbling through the sleeping streets of nighttime Warsaw. He created a tribute to the city – but also championed ordinary human solidarity in a world racing ahead on the wings of fledgling capitalism. “Breaking through Warsaw’s unfamiliarity had been a difficult task,” he recalled. “I was shocked that people in bars didn’t make new friends, but sat in their own closed groups. When you asked a passer-by for the time, they would react with something like fear, dislike, suspicion… I think that’s not the case anymore. Warsaw developed a number of public spaces: cafes, parks, or gardens. Places where everyone can sit, chat, feel good, and enjoy interacting with others.”

Gajewski’s films still reflect the position of an outsider cast into a new, unfamiliar reality. The director stays in touch with the world. Warsaw showed rural Poles migrating into cities. During the times of mass emigration Gajewski teamed up with Austrian producers to film Radek Knapp’s bestselling novel, Mr Kuka’s Advice: a young man’s trip to Vienna gives him a crash course in maturity, showing that the Western paradise has its own problems, dark sides, and cracks in identity. Similarly, Strange Heaven, filmed in an austere, para-documentary style, was inspired by true stories of Polish migrants: an overzealous social worker causes a young Polish couple’s daughter to be placed in foster care as a result of misunderstandings and the confused child’s imaginings.

Golden Lions winner “Warsaw” was greeted as a new, fresh voice in Polish cinema had been short on new artists and visions

Culture clashes have become his specialty. Gajewski is capable of capturing small gestures that reflect the disconnect between the cool, collected Swedes and more impulsive Poles raised on romantic notions. He showed similar skill at pointing out the mental divisions in Polish society. Now he’s back to chronicling people who leave their homes in search of a better life. This is his next project in his own words: “Two women, a Pole and a Syrian, meet in a truck speeding to Belgium. This will be the most important encounter in their lives.”

Gajewski is no longer an outsider, he grew into the world of film. He had headed the Munk Studio – the Polish Filmmakers Association’s initiative for young creators – for 8 years and served on the board of Directors’ Guild of Poland for another 3. Gajewski grew into Warsaw as well – he lives in the Ochota neighborhood with his wife, actress Agnieszka Grochowska, who starred in two of his features, and their two children. He lets fatherhood open his eyes to another world; as he says of his four-year-old son, “Every day I’m in touch with someone who doesn’t lie, who openly states his will and desires, who has excellent memory, sees more of our reality, and is curious about everything. I’ve been searching for a spiritual master all my life – and now I found him.”