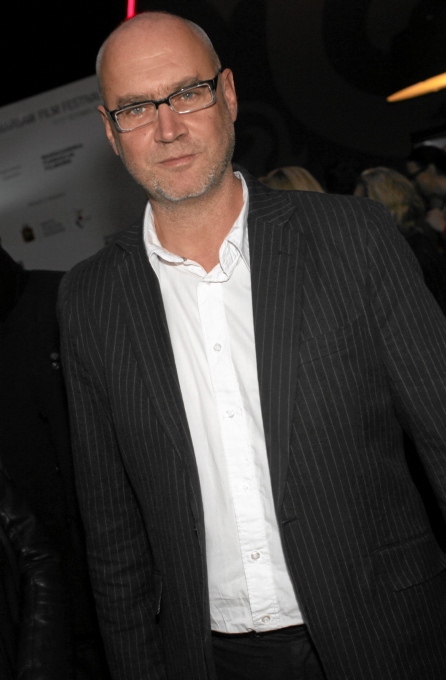 Before entering the film industry, he graduated philosophy at University of Warsaw. His late debut “Squint Your Eyes” (2003) became a festival sensation all over the world. Similarly enthusiastic was the reception of his “Tricks” (2007), what is proven by award on Venice Film Festival and Eagle – Polish Film Award for best director. Member of board of Directors
Guild of Poland.

One of the most important figures in Polish cinema. He has been called “a truly worldly film auteur”. His films have been distributed in dozens of countries around the globe, from Japan to Portugal. And they have received numerous awards: “Imagine” in Warsaw and Chicago, “Tricks” in Gdynia and Venice, and “Squint Your Eyes” – the most interesting Polish debut of the 21st century – in Gdynia and San Francisco.

Already as a teenager he was shooting his first films using a 16mm Krasnogorsk camera. Before graduating in directing from the Department of Radio and Television of the Silesian University in Katowice, he received an MA in philosophy from the Warsaw University. And it shows in his films: they are part parables, part fables, simultaneously  light and penetratingly wise, seductive and subtle, breaking down the traditional divide between art house and popcorn fare. They are always filled with humor and a kind of melancholy warmth, even though Jakimowski is always addressing fundamental issues. Namely: how to deal with the unfairytalelike reality of our non-fairytale world.

“I grew up during communism. In the dark years of martial law. But I managed to spend that particular period in the best possible company – studying philosophy,” said Jakimowski in an interview. He was wrapping up his directing studies during the 1989 breakthrough. “Our generation didn’t find this new era an easy fit: we were too young to participate in the transformation, and too old to painlessly adapt to the new reality,” recalled the director.

For years he made short films (including “Pogłos” from 1991, which received an award at the “Jazz Film Salon” International Jazz Film Festival) and documentaries in which he often examined the present through the lens of a painful past. Such as “Miasto cieni” (1994) about Tykocin, which turned from a thriving Polish-Jewish town into the scene of a massacre, its Jewish inhabitants having all been shot during  the Second World War. “My film talks about how Poles who live in the post-Jewish homes and stare every day at the empty synagogue try to deal with this demolished pillar of their identity,” recalled Jakimowski. In 1998, he made “Wilcza 32” about the Warsaw tenement house which dates back to the war and the Warsaw Rising: constantly welcoming new tenants, run down, anchored in the past. “One time, we were passing that house with my wife, when suddenly a group of winos surrounded us.  She got scared, but it turned out they simply recognized me. They remembered me, because I’d give them odd jobs while we were shooting the film. I have a soft spot for those people,” said the director.

It was during work on “Wilcza 32” that Jakimowski met Olga Prószyńska, who five years later went on to play Mała – the teenaged protagonist of “Squint Your Eyes” (2003). To this day, that film remains a phenomenon in Polish cinema: made by a group of friends (including cinematographers Adam Bajerski and Paweł Śmietanka, composer Tomasz Gąssowski, and set designer Ewa Jakimowska, who is the director’s wife), using their own money, fully professionally, on film stock, but not without problems. The film was so expensive that its authors went into debt – and in order to pay it off, Jakimowski and his friends founded Zjednoczenie Artystów i Rzemieślników. Thus a new production company was born which to this day produces all of Jakimowicz’s films.

“Squint Your Eyes” was a revelation.
It rediscovered values that had been neglected in Polish film: sensitivity, goodness, friendship

“Squint Your Eyes” is a languid tale about the friendship of mature Jasiek (Zbigniew Zamachowski) and teenaged Mała (Ola Prószyńska) that balances on the line between seriousness and irony, comedy and tragedy. The girl runs away from home and moves in with a highly educated humanist that works as a night watchman. They both don’t quite seem to fit into the world around them, both seem unapproachable and hard-faced. But it’s the time they spend together that is the film’s focal point – because it is time, the intense experience of the here and now, and at the same time the transitory nature of things, that plays the biggest part in “Squint Your Eyes” (dedicated to the director’s daughter Martyna). “Things don’t so much pass as they grow distant; you still see them, but ever less clearly,” explains Jasiek to Mała. “I was looking for a way to soothe the deepest fear that a child – or an adult, for that matter – could have,” notes Jakimowski. “Children are afraid of things passing, of death. The moment they learn nothing lasts forever is a shock to them. But, as physics teaches us, nothing is ever truly lost.”

“Squint Your Eyes” was a revelation at the Gdynia Film Festival (it got five awards – including the Special Jury Prize). It also received five Eagles, including three in the main categories: best picture, best directing, and best screenplay. Andrzej Jakimowski was also awarded the 2003 Paszport Polityki “for an artistically sophisticated image of provincial Poland, for rediscovering the values that had been neglected in Polish film, such as sensitivity, goodness, friendship”.

Jakimowski doesn’t like to rush work – he made his next feature film, “Tricks”, five years later, in 2007. Once again in Wałbrzych, shot beautifully by Adam Bajerski, and once again dealing children who are growing up and learning about the world: this time centering on the 7-year-old Stefek (Damian Ul). A boy who spots his absent father (Tomasz Sapryk) by accident at a train station, and decides to do everything he can to make his parent – unbidden by anyone else – come back home.

Because the boy’s chief pastime is tempting fate and wishful thinking: so that the sad man finally gets to sell his apples, so that the people at the train station pick up the coins from the tracks, so that the toy soldier doesn’t fall when the speeding train passes over it. It’s not magic or metaphysics, but rather coincidence, physics, a play on human reactions. But Jakimowski isn’t interested merely in harmless fun – his protagonist tests the boundaries of what is possible with childish zeal. Railing against the fatalism of grown-ups, he is directing reality, because he deeply believes that life doesn’t follow a predetermined course, that you can shape and mold it any way you like. And Jakimowski would very much like to defend this conviction.

“Sztuczki” became another proof that the director found his own language: based on intelligent obliqueness, sprouting with witty side plotlines and scenes, proud in its uniqueness, offering the absence of action as a sort of daring challenge to time – and fate. “Polish cinema gained an important director – an European unburdened by our national insecurities” – wrote Tadeusz Sobolewski. The film received several dozen awards around the world, including in Gdynia (apart from the Golden Lions for the best film, it also received an award for cinematography), Venice (the Europa Cinema award for the best European film, and a UNICEF special mention), at the Manheim-Heidelberg International Film festival, in Tokyo, Sao Paulo, Thessaloniki, Tbilisi, Paris, and Miami.

The success of “Tricks” was made even bigger by the fact that it was the first film since Kieślowski that went into regular distribution in a dozen European countries. No wonder Jakimowski made his next picture in Lisbon, as a Polish-French-British co-production starring the excellent Edward Hogg and Alexandra Maria Lara

“Imagine” (2012) is a hypnotic tale about a blind boy who learns how to see the world without his eyes. The story takes place in sun-drenched Lisbon, at an optical clinic where children from around the world are taught by an instructor, Ian (Edward Hogg), known for his highly unconventional methods. The white cane, or the assistance of others, are in his opinion completely unnecessary: all it takes to pour water into a glass, navigate a crowded sidewalk, or even cross a busy street, is a trained ear, logical thinking, and familiarity with the principles of echolocation. That is: sensing various objects thanks to the properties of echo, which can be conjured up by, say, Ian’s trademark “clucking”.

The protagonist of “Imagine” seems to be part mage, part reality bender: like John Keating from “Dead Poets Society”, he hypnotizes the children (and his blind friend from the clinic), introducing the world to them. But Jakimowski’s film isn’t only about those who cannot see: actually, it is another – after “Squint Your Eyes” and “Tricks” – story about attentiveness. And about imagination, which everyone – not just the blind – can use to discover a tangible, real world that is also their own.

Jakimowski’s film, dedicated to his wife Ewa Jakimowska – a set designer, and his longtime collaborator – was praised around the world. “It is a story about the inner life of the blind, but also about the importance of transgressing boundaries and taking risks. A tale about liberation from darkness through imagination. And at the same time, a very discrete love story,” wrote a film critic in “Der Tagesspiegel“. “Everything here is in perfect balance: the beauty of the unpretentious cinematography and the incredible, subtly mixed sound that underscores the lyricism of the seduction game” added one in “Le Monde”. “It’s more than just a film” (“Toro Magazine”), “the real magic of improbable, long walks” (“Times of News”), “a film that you truly experience – laughing, crying, rapt” (“Toronto Film Scene”).

“Imagine” was invited to several dozen festivals around the world (including the Toronto Film Festival, where it premiered, as well as the London Film Festival, and the Busan Film Festival) and received many awards – including the Audience Award, and the award for best directing from the Warsaw Film Festival, special mentions in Gdynia, Tarnów, Łagów, Chicago, Emden, and at the Five Lakes Festival. The film was distributed in over sixty countries, including France, Germany, Austria, Russia, Turkey, Ukraine, Portugal, and Japan.

Andrzej Jakimowski – together with his regular cinematographer Adam Bajerski – is currently working on his latest film, “Once upon a Time i November”. It tells the story of a Warsaw mother (Agata Kulesza, whom audiences might recognize from “Ida”) and her son (Grzegorz Pałkowski) who are evicted from their apartment. Everything takes place in November 2013, when the city was rocked by huge demonstrations – including one by young nationalists. A part of it was shot on November 11, the Polish Independence Day, and the film will also feature archival material.

Read interview about “Once Upon a Time in November”