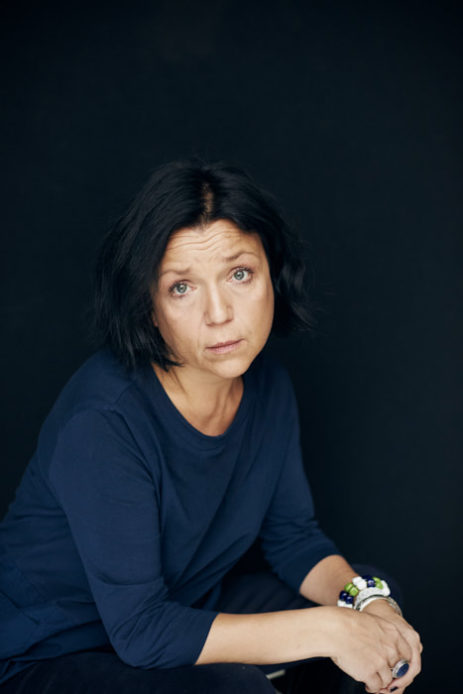 Director and screenwriter. Together with her husband Krzysztof Krauze she directed “My Nikifor” (2004), “Saviour Square” (2006) and “Doll” (2013). Awarded with Golden Lions in Gdynia, Eagle for Best Director and Special Mention in Karlovy Vary. Her „Bird Are Singing in Kigali”  about genocide in Rwanda will be released in 2017. President of Directors Guild of Poland.

Director, writer, and one of the most active members of the Guild of Polish Directors formed in 2015. Joanna Kos and her husband, Krzysztof Krauze, have long been one of the most interesting creative duos in the history of Polish filmmaking: their joint productions include My Nikifor, Saviour Square, and Papusza

After graduating from the university she started working in the Ronald S. Lauder Foundation, then went on to write and direct TV shows. Planning to produce a documentary on the renaissance of Judaism in Poland, she turned to Krzysztof Krauze for help. The movie was never made, but the duo soon started collaborating on one of the most important Polish movies after 1989 – The Debt (1999).

“Joanna provided a great deal of help with the script, casting, editing, and sound,” Krzysztof Krauze recalled. Joanna Kos-Krauze added: “Krzysztof, who’d never written a script before, put his trust in me and found the perfect partner, because I’m always at hand – who else could endlessly refine the script and sit all night at the kitchen table, debating the next scene?”

“My Nikifor” achieved incredible worldwide acclaim; its authors  won dozens of awards. The movie was screened in many countries

The Debt was the indisputable winner of the Polish Film Festival in Gdynia, receiving Golden Lions for best feature and best actor. Starring Andrzej Chyra, then 35 and relatively unknown, it launched his film career. The movie won over the audience as well as film critics, who saw it as “an honest portrayal of Poland during transformation: a place where everything is in motion, everyone tries to find their place, and the rules of the ongoing game are never entirely clear,” in the words of Lech Kurpiewski.

As assistant director and dialogue writer, Kos-Krauze is the co-creator of Krzysztof Krauze’s three-part TV movie Wielkie rzeczy (2000). Her greatest accomplishment, however, was persuading her husband to produce My Nikifor with her. “I spent over 15 years asking the important people in my life: Ever heard about Nikifor? It wasn’t his art that fascinated me the most, but the life of that homeless, despised, ridiculed man.  Nikifor couldn’t read or write. but he could paint – and he tried to tame the world through painting,” Kos-Krauze explained.

My Nikifor was an extremely daring movie, its male protagonist depicted by actress Krystyna Feldman. Compared to The Debt it was muted, painterly, narratively intriguing. Nikifor is almost always seen through the eyes of Marian Włosiński (Roman Gancarczyk) – the man who gave up his own family to care for the painter and even carried him on his own back when it was necessary. My Nikifor achieved incredible worldwide acclaim; both its authors and Krystyna Feldman won dozens of awards, including Crystal Globes in Karlovy Vary for best feature film, best director, and best actress. The movie was screened in many countries.

Saviour Square (2006) was officially jointly directed by Joanna Kos-Krauze and her husband. The script contained plenty of their personal experiences, including borrowing money from Mother and the bankruptcy of the developer who was supposed to build their home, and their neighbors starred in several scenes. “Your movies reflect your life. If you’re bitter and cynical, it’s going to show in your film,” the director explained. Saviour Square also gave us exceptional, touching characters and made significant artistic discoveries with Jowita Budnik’s first-ever leading role (recognized with an Eagle for best female lead) and Ewa Wencel’s enchanting supporting performance as the mother-in-law. The actresses also won awards at the Gdynia festival. Their multifaceted, nuanced on-screen personas are the result of Joanna Kos-Krauze’s distinct style: “Instead of running typical auditions, we spend a lot of time talking to the actors, checking what’s going on inside them, in their hearts and lives. We instinctively reach out to people we’d personally like to interact with, then collectively work on the script,” she explained. (Jowita Budnik, Ewa Wencel, and Arkadiusz Janiczek were credited as co-writers for Saviour Square.)

The story of a couple caught in a financial and familial trap of codependencies, debts, and demands proved a fascinating parable on interpersonal relations, pursuit of independence, and the price of freedom. Its language is similarly delightful – the viewers of Saviour Square are immersed in a piercingly authentic portrayal of the protagonists’ existence that simultaneously reflects their own lives. This made the movie a resounding success both with festival juries and worldwide audiences from Gdynia (Golden Lions for best feature film) to Valladolid and Trieste.

“Birds are Singing in Kigali” speaks about Rwanda and grief, but also about a very difficult friendship between two trauma survivors – the protagonists are witnesses of genocide

Nine years after My Nikifor, Joanna Kos-Krauze and her husband once again went on to depict a pure artist unaware that she was creating art. The black-and-white Papusza (2013) shows the most famous Romani poet, Bronisława Wajs, brilliantly portrayed by Jowita Budnik. Papusza herself didn’t like being called a great poet – for her, writing just meant collecting the phrases, similes, and metaphors that simply existed in the space and nature around her. Caught on film, Papusza seemed like she wanted to dissolve in the world and become transparent. Her unexpected literary success was a curse that set her apart from the crowd, taking away her anonymity and the only thing in her life that seemed immutable: her Romani identity and place in the community.

“I learned about Papusza a long time ago as we analyzed her poems in high school, then I went on to read Jerzy Ficowski’s books about the Roma,” Kos-Krauze recounted. “However, we wanted to go beyond that, to show the complexities of Romani lives in our film. For the Roma, Holocaust trauma and social stereotyping add up to an understandable fear, distrust, and need for isolation. Being female made Papusza’s life all the more challenging. Our movie shows the search for a space between freedom and community, as well as the price of that quest.” This endeavor was also favorably received in Poland and abroad; the list of its awards includes the Special Jury Mention at Karlovy Vary and an Eagle for Jan Kanty Pawluśkiewicz’s haunting score.

Joanna Kos-Krauze and Krzysztof Krauze spent almost ten years working on their next project, Birds are Singing in Kigali. Having lived in Africa for several years, the directors decided to make a movie revolving around the Rwandan genocide, the slaughter of around a million people. “The questions we want to ask are: how do you live after a genocide, how do you come to terms with the world and yourself?,” Kos-Krauze explained.

The plot of the movie starts in 1994 and concludes four years later. Its protagonist, a Polish ornithologist (played by Jowita Budnik), is studying the decline in vulture populations in Rwanda. Partly by accident, partly despite herself she rescues her coworker’s daughter (Eliane Umuhire) and brings her to Poland. “This movie speaks about Rwanda and grief, but also about a very difficult friendship between two trauma survivors – both our protagonists are witnesses of genocide,” Kos-Krauze recounted. “We wanted to ask if forgiveness is possible at all, and whether forgiveness means reconciliation. There’s also another theme to Birds are Singing in Kigali  which is particularly relevant at this point – Claudine, our Rwandan heroine, is a modern refugee who ends up in Poland despite her wishes due to political circumstances and tragic events. She doesn’t want to be here at all.”

The movie was filmed in Poland and Rwanda. “While Rwanda is a beautiful place, it’s almost a police state. Its geopolitical situation is extremely challenging,” the director reminisced. “However, my African crew gave me everything I could wish for – plenty of trust, support, and true friendship.” As filming was underway, Krzysztof Krauze had already been seriously ill, which didn’t stop him from working on the set in Wrocław. He died on Christmas Eve in 2014 after a long battle with cancer.

Joanna Kos-Krauze finished the movie on her own. Birds are Singing in Kigali won the First Look award, dedicated to films in post-production, at the 2016 Locarno festival. “Working on the movie saved me in that difficult period,” Kos-Krauze recalled. “I immersed myself in work and didn’t even have time to feel sorry for myself. It’s obvious that the movie won’t be the same without Krzysztof, but I don’t want to compete with anyone – that’s not what filmmaking is about. It’s about taking things we don’t want to hear and saying them out loud.”

2017 Birds are Singing in Kigali (feature film, in production)