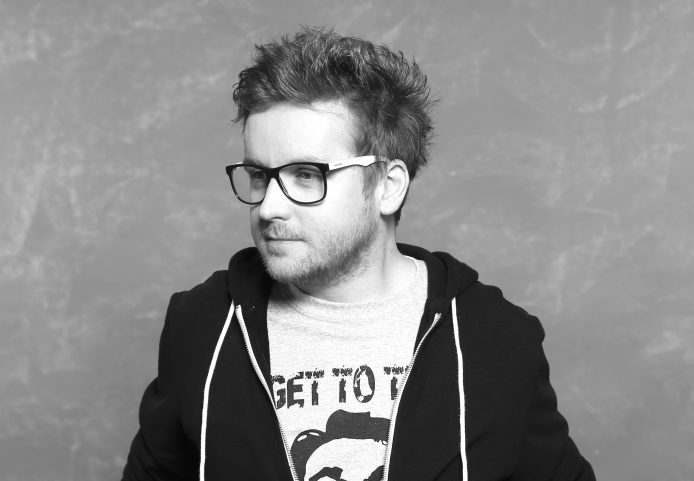 I still remember the computer games of my youth: Atari, Amiga, the first PCs. Just squares, crosses and circles flying around the screen, with our imagination filling in the gaps. Today, it’s difficult to find the space to let your imagination breathe. And an unexercised imagination atrophies – says Bartosz M. Kowalski. He loves horror films and claims that he wants to bring new worlds into life on screen, playing with conventions and mixing genres.

He belongs to a generation raised on VHS tapes. To a time when at the local rental store you could find “Predator” alongside Peter Greenaway, “The Fugitive” alongside Ken Loach, “A Nightmare on Elm Street” next to David Lynch. But so far, in his documentary films and his feature debut “Playground”, the director has shown himself as an astute observer of a society marked with scars of transformation. As if he couldn’t shake reality from his mind.

He was born in 1984 in Gdynia. He grew up in transformation-era Poland. Seeing store shelves sprout with new goods, the borders open, and people start aspiring to a standard of living from beyond the Iron Curtain. But he also grew up with more daring dreams – unfettered by poverty and the lack of a passport or foreign language skills. He learned English from an early age, and then attended a French-language high school. When he turned 11, he caught the film bug. From his cousin, Paweł Maślona, also a director. After seeing “Independence Day”, he started experimenting by blowing up cardboard “houses” in front of an amateur camera. And when, as a teenager, he started planning his future, he zeroed-in on studying directing abroad.

He loves horror films and claims that he wants to bring new worlds into life on screen, playing with conventions and mixing genres. But so far, in his documentary films and his feature debut “Playground”, the director has shown himself as an astute social observer.

His father, who designed ships for a Dutch company, helped him obtain a scholarship. And so, Kowalski ended up at La Femis, and then at the École Internationale de Création Audiovisuelle et de Réalisation. His group, which included a Russian, a Swede, and a Colombian, seemed a bit more relaxed than a strictly “French” school would have been. Although his professors weren’t always fans of his proclivity for horror, he used that time to learn his craft: I went to film school thinking that I already knew everything there is to know about cinema – he recalls. During the first class I realized that I’m actually a complete newbie. After five years of studying, I once again felt really wise. But then I arrived on a film set. And once again realized how much I still have to learn.

In the meantime, he also did a three month stint at the University of Southern California. The US was a different world – he recalls. – It was difficult to adjust to the fact that you had to go by car to buy bread in the morning  A car which I didn’t have. Everything there reminded me of how alien I was. Even the little things: drinking beer from plastic cups, and the never-ending beer-pong.

Today, he claims that when he got in a car to drive to Paris at 19, he was convinced that he’d only be returning home for holidays. Five years later, two days after defending my Master’s Thesis, I got the fuck out of France. The French don’t like outsiders. And Parisians hate them. It’s a city where people don’t look each other in the eye in the street. Since the Saint Denis riots, it has become hostile, suspicious, and intimidated. I started missing Poland. And I realized that my place was here. I feel at home here. This is my type of everyday grayscale. I think I’d been too in love with the West, and that love turned out to be more difficult than I had imagined as a young boy.

And so he came back to Warsaw, to a completely new environment – having studied in France, he didn’t know anyone from the Polish film scene. He spent the first few days sending out emails to various producers he found on the Internet. He latched onto different projects, doing assistant director work. Until this “everyday grayscale” he liked so much came knocking. While doing some commercial work in a remote part of Warsaw’s Wola district, he found himself several extras short. He walked up to two guys whom he’d normally rather not bump into at night. And after the shoot, they invited him out for a beer, and to his surprise – they connected.

Bartek and Paweł became the protagonists of his feature-length documentary “A Dream in the Making”. It showed an imperfect world – one of poverty and violence, where your dreams don’t extend beyond the boundary of your courtyard, where you have to prove every day that you’re “not a pussy” and have to fight tooth and nail for every opportunity. But he managed to get past the guys’ defenses and show the hope within. Their desire to change their lives. I wasn’t putting them up on a pedestal – he explains. – I was showing two socially excluded guys who had the courage to dream of a different life, and who chased those dreams. Młody now works as a stuntman, just like he wanted. And Paweł already has three children. They’re doing good. They were both in “Playground”. Because if you want to share something of your own, when you’re open and honest, you will always find a connection with another person, build trust, and eventually form a friendship.

This drive to combine seemingly disparate realities has not abated. In his next documentary, “Unstoppables”, he showed a community that theoretically had no right to come to life. He observed the relationships within the American football team Seahawks Gdynia – a group of men divided by practically everything, but united by a passion for a sport that isn’t exactly celebrated in Poland, and by their ambition. I was touched by their unity – he admits – The football field bridged a gap between the completely disparate worlds of art school students and former convicts. In “Unstoppables”, he showed a brighter side of contemporary Poland.

His feature film debut “Playground” did the opposite. The film is like a blow to the head. Strong, on point, uncompromising. Three kids on their last day in primary school. It’s the last chance for a young girl to confess her hidden feelings for a boy. She opens up. But he, along with his friend, hurt her in return. Then they go out into the city. Without a reason, just wandering aimlessly. And in the end commit a horrible crime.

Bartosz M. Kowalski’s feature debut is like a blow to the head. Strong, on point, uncompromising.

“Playground” shows an impressive cross-section of Polish society. Kowalski shone a light on the post-transformation inequalities which have impacted people’s lives from early childhood. But he also crafted a striking picture of staggering, corrosive boredom. Of the lethargic monotony that drives you to do anything just to feel something.

We can’t handle aggression – comments the director. – In case of kids, we don’t call it psychopathy, but behavioral disorder. The more “spectacular” cases sometimes make it to the media. A teenager from the Lublin area murders his parents with the help of his girlfriend. In Nowy Targ, three young people tie a dog to a car and drag it down forest roads until it dies. In a village outside Gorzów Wielkopolski, a small boy drowns an animal in a bathtub. But these aren’t isolated freak stories from TV. These things happen every day. My expert witness friend, whom I asked to read the “Playground” script, wasn’t shocked at all. She told me about a case she had worked on several days prior: a girl tried to kill her sister by stuffing a toothbrush down her throat. Deliberately, fully aware of the consequences of her actions.

Kowalski made a film without any frills, in the vein of Ken Loach, the Dardenne brothers, or Michel Franco. He based it on a real story from Great Britain, but did solid research in Poland and drew on the experience of his mother – a child psychologist. A student at her school was driven to suicide by mean comments on social media. “Playground” brings to mind the moral dilemmas from Kieślowski’s “A Short Film About Killing” – it’s a tale about the constant struggle between good and evil that takes place here and now, over the course of minute, seemingly insignificant events. But the director rejected all the easy answers. In his vision, the violence doesn’t have a “source” or an explanation. That’s what makes it so terrifying.

Perhaps that is also why screenings of “Playground” sparked such a heated debate? The director confronted moviegoers with their own passiveness. With the times when they pretended not to notice the aggression around them. With the prevailing conviction that the current aggressive rhetoric of public debate won’t have an impact on young people. But alongside the outraged were also those who welcomed “Playground” with open arms. Following its world premiere at the San Sebastian Film Festival, it received two awards in Gdynia. The film was distributed in the US, Turkey, Spain, Germany, and other countries. It received a lot of support from critics and moviegoers – says Kowalski. – And even though some people threatened me with death or spat on me on the street, I still wouldn’t change a thing.

The director claims that all these experiences have fortified him. They taught him to defend his vision. Currently, he is preparing his next project – “Przejście”, about a nursing home. – The script was loosely inspired by the life of my deceased grandfather, and my own experiences with the health care system – he notes. – I know how you feel when you’re awaiting your diagnosis, and death seems a hair’s breadth away. in “Przejście”, he will tell the story of an older man who uses his imagination to try to reconcile himself with his approaching death. Kowalski wants to finally set his horror fantasies loose. He’ll indulge in them even more in a series which he is working on for one of the streaming services – a tale about a vampire priest. Maybe now Bartosz Kowalski will finally have some fun with cinema? If he allows himself to forget about the bleak reality outside his window for a moment.