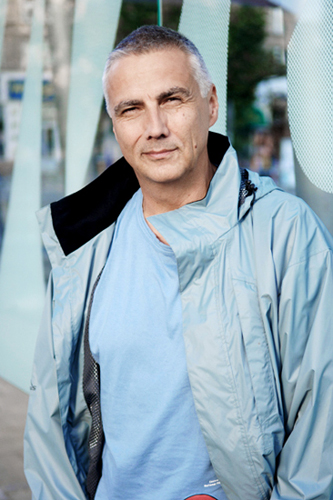 Director and screenwriter. With his wife Joanna Kos-Krauze they were the most influential duet of Polish cinema in last years. Together they created “The Debt” (1999), “My Nikifor” (2004), “Saviour Square” (2006) and “Doll” (2013). Multiple Polish Academy Awards winner, Crystal Globe and Golden Lions holder.  One of the founders of Directors Guild of Poland.
He passed away in 2014.

There are people whose departure leaves a tremendous void. Krzysztof Krauze was one of them and he’s sorely missed – for his careful observations of reality, for the films that always told us something profound about ourselves, for his wise advice given exactly when it was needed, for a few words of warning when we would start heading in a dangerous direction. And also for his smiling presence at festivals and his infectious warmth

He hated narrow worldviews; maybe that’s why he liked to stay on the fringes and didn’t identify with any groups. He knew how to combine opposites: subtlety and respect for weakness with a critical perspective; sensitivity with intellectual honesty; empathy with not letting anyone off the hook – not others and definitely not himself.

Krzysztof Krauze was born in 1953. His parents were intellectuals – his mother an actress and his father an attorney. Fascinated with his mother’s world, Krauze went to the Lodz Film School’s cinematography department;  realizing it wasn’t a good fit, he soon switched to documentary filmmaking. While he was visiting his mother in Vienna in December 1981, martial law had been imposed in Poland. Krauze decided to stay in Austria. He made a living doing odd jobs and manual labor, then moved to Paris. This experience left its mark on him.

He found out that emigration is never easy. This is what he said in 2010 in the Republic of South Africa, where he moved due to illness: “Our true homeland lies in our biographies. When I bring my life story to a South African beach, I don’t feel alienated. A delightful breeze cools my skin as I stroll with my Nordic walking poles; the sensation gives me wings. I feel at home.” Each of his previous homes gave him something, because Krauze was observant and skilled at catching the nuance. He challenged those truths that, parroted thoughtlessly, often turn into cliches; maybe that’s why he spent so much time searching for his unique cinematic language.

“The Debt” is one of the very few honest and accurate portrayals of the period of sociopolitical transformation in Poland. Krzysztof Krauze believed that movies should be made in defense. In defense of tenderness and “everything that’s wrongly perceived as weakness”

After Krauze returned to Poland and directed his famous documentary Jest, he shot his feature debut – New York, 4 A.M. – in 1988. He didn’t like it. Similarly, he wasn’t a fan of his next feature, Street Games, produced 7 years later. He claimed he devoted too much time to self-examination and too little to watching others. It was at that time, he admitted, that he realized movies should be made in defense. In defense of tenderness and “everything that’s wrongly perceived as weakness.” But most of all in defense of people: the hurt, the weak, struggling to be heard.

As he started working on The Debt, Krauze already knew not just how to make a movie, but why. His picture became one of the very few honest and accurate portrayals of the period of sociopolitical transformation in Poland. Krauze based the film on the true story of a businessman who, blackmailed and hounded by a gangster, ended up killing his tormentor. The movie depicts ineffectual government institutions, the jury-rigged everyday life in the 90s, the hegemony of money, aggression – and also a persecuted man who loses everything that mattered to him. Many years later, when I asked Krauze if he thought it was possible to change anything by making films, he pointed to The Debt: Sławomir Sikora, after whom the protagonist was modeled, was finally freed in 2008 after numerous pleas, appeals, and requests for a presidential pardon.

Saviour Square, co-directed with Joanna Kos-Krauze, is an offshoot of this way of thinking. It’s a poignant, realistic movie, firmly set in the modern times. The bankruptcy of a housing developer sets the gears of evil in motion, smashing the hopes and dreams of a young couple. While Krzysztof and Joanna presented a young woman spiralling into depression, they also showed culture, patriarchal and brutal; the words we say to each other every day; the “banal” violence that poisons the reality. Once again Krauze’s protagonist was a person unable to defend herself, lost, slipping ever deeper into illness, rejected by her loved ones.

“Poland became a country where strength is the deciding factor. We lack respect for those weaker than ourselves – minorities, women, children, the ill, the disabled… Fighting for their rights is every thinking person’s duty,” Krauze said. But between those two movies he made another important picture: My Nikifor. This lyrical story about one of Poland’s most famous naïve painters is also a tale of friendship and sacrifice: the painter Marian Włosiński gave up his career to look after the illiterate Lemko artist who was, at times, contrary and ungrateful – because he recognized Nikifor’s talent.

It could seem that the plotlines of The Debt and Saviour Square have nothing in common with the lyrical biopic of Nikifor – but this film, too, speaks of respect for others. A homage to art and strength born from subtlety, it depicts an average, uneducated, simple man with beauty at his core, surrounded by the crudeness of a stifling political system.

Krauze’s cinema teaches self-reflection and tolerance in the broadest sense, striving to achieve a profound understanding of other people.

This clash of contrasting realities is even more pronounced in the slow-paced, black-and-white Papusza, another film that Krauze co-directed with his wife Joanna. This stunning portrait of the Roma poet chronicles the life of a woman buffeted by winds of history: rooted in a society that stifled her originality and pushed away by thise outside her cultural background, living in the wildly intolerant era of Communist Poland, her past marked by a crime that was never rectified… However, it also depicts love – tender and impossible love. Practically every character in this film is nuanced, both victimized by their environment and striking out at others. After all, this is the message of Krauze’s cinema: it teaches self-reflection and tolerance in the broadest sense, striving to achieve a profound understanding of other people.

Those had been his off-screen goals as well. His “ten commandments,” an account of his battle with cancer published in the Gazeta Wyborcza daily, became a helpful manual for many people with oncological diseases. “Remember that you yourself decide whether you’re going to live. Not the doctor, not the cancer. It’s you! Set course for hope,” he wrote.

Krauze kept working till the end, busy producing his and Joanna’s next movie – The Birds are Singing in Kigali. This project kept him going, despite mounting difficulties. He died on December 24th, 2014 – on Christmas Eve that was also the first day of Hanukkah, and shortly after the premiere of Papusza, his beautiful homage to Roma culture.

2017 Birds are Singing in Kigali (feature film, in production)