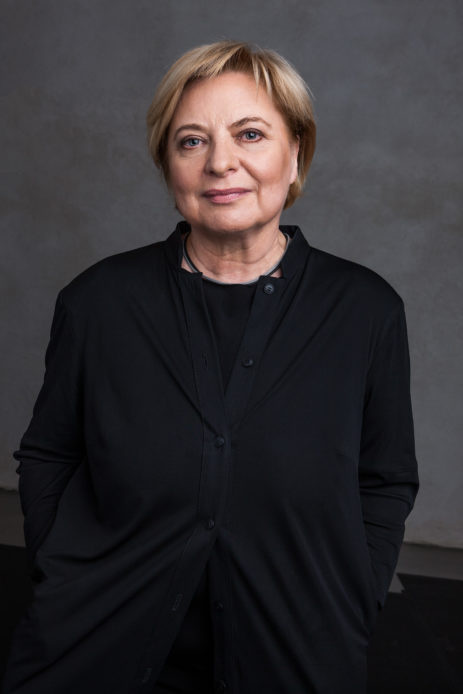 For “Departure” (1991), made together with her husband Piotr, she received Special Jury Prize in Gdynia, but she was in the spotlight already — her student movie “By Touch” (1985) was awarded home and abroad. With teleplay “Karski” she won five awards in Sopot, including Best Directing Prize. Łazarkiewicz created one of the most original Polish TV series “Into Deep Water” (2011)”.

She likes change. She makes excellent productions for Television Theatre, and her TV series “Into Deep Water” was hailed as one of the most original in the public broadcaster’s history. But cinema remains her main stomping ground

Her first fascination was theatre – and she followed it in the 1970s to Wrocław, which was a hotbed of theatre experimentation at the time (it was home to, among other things, Jerzy Grotowski’s Laboratory Theatre), to pursue theatre studies at the Wrocław University. She would repeatedly return to her theatrical roots – as the literary director of the Jaracz Theatre in Olsztyn, as a director of stage productions, and author of many excellent Television Theatre shows. But destiny led her to cinema.

“In cinema, I was always attracted to two areas: formal explorations which allow you to tell original, intimate, psychological stories, and socially aware films that act as reflections of the world outside”

Among the films that shaped her, she often lists works by Robert Bresson, Andrei Tarkovsky, Ingmar Bergman’s “Fanny and Alexander”. “In cinema, I was always attracted to two areas: formal explorations which allow you to tell original, intimate, psychological stories, and socially aware films that act as reflections of the world outside” – says the director. It was evident in her first documentaries. On one hand we have “Służba” (1983) about the loneliness and ever-out-of-reach dreams of a young suburban train conductor. On the other hand – “Nostalgia” (1983) about Greek refugees in Jelenia Góra, celebrating the anniversary of the toppling of the military junta in Greece, a film that also served as a metaphorical tale of longing for freedom, and was shot in the dark period immediately after the end of martial law in Poland. 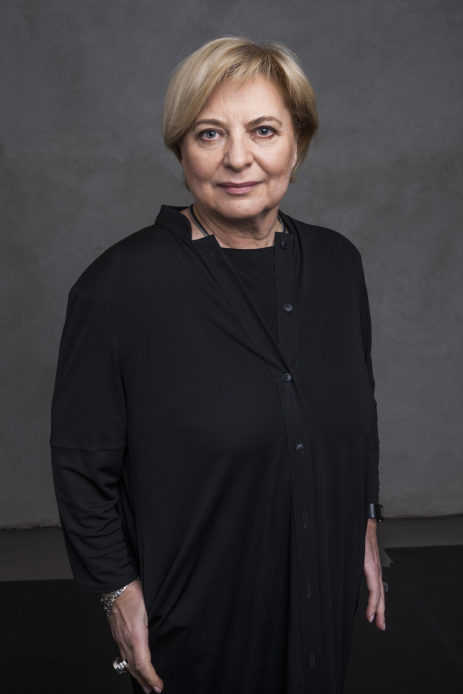 To this day, her most recognized film remains her cinematic directorial debut “The Last Schoolbell” (1989) which received, among other awards, the Grand Prix at the Debut Film Festival in Koszalin. It was meant to be a portrait of youthful freedom. A coming of age story, but also an obvious criticism of the rigid and constraining nature of public schooling. I’m making a film for young people, and I’m taking their side – said the director during filming. School gave me a sense of wasted time – it didn’t make me more curious about the world, it was divorced from reality. (…) “The Last Schoolbell”, which was co-written by my friend from the Reytan high school, literature studies professor Włodzimierz Bolecki, is a manifesto against schools. – she added several years later.

But when “The Last Schoolbell” arrived on screens in the fall of 1989, several months after the mass strikes in Poland, and right on the heels of the Round Table negotiations and June elections, it became the best, and also most popular statement of a whole group of filmmakers who went on to be described as “the martial law generation”. The school, at which a new boy arrives after he had been expelled from other institutions for political insubordination, was essentially late 1980s Poland in a nutshell: everyday conformity and seemingly innocent indoctrination by the government (or in this case: the teachers) clashes with the attitude of the new student as he awakens a hunger for rebellion, but also community, in his schoolmates.

The sophisticated form of her films, and their certain timelessness, don’t mean that she eschews very specific historical references

And this rebellion is realized through art – a show combining theatre and happening prepared by the students, called “History Lesson”, which gives new life to songs that accompanied the “Solidarity” movement in the 1980s: especially the oeuvre of Jacek Kaczmarski (e.g. “Dom wariatów”) and Cracow’s Piwnica Pod Baranami (e.g. “Miejcie nadzieję” with words by Adam Asnyk and music by Zbigniew Preisner, who composed it upon hearing of the declaration of martial law in Poland). And indeed, one of the main characters is played by Jacek Wójcicki from Piwnica Pod Baranami, who met the director in Cracow through Preisner himself.

In a sense, “The Last Schoolbell” was a surprise: after Łazarkiewicz’s excellent diploma work “By Touch” (1985) she was seen more as an author of intimate women’s films that challenged stereotypes. This regrettably somewhat forgotten film takes place in a gynecological ward, or rather in a small room at that ward, where two patients meet: Teresa (Maria Ciunelis), closed-off, almost as if she were awaiting death, and Aneta (Grażyna Szapołowska) – a tempestuous, pregnant ballet star. Their initial distrust slowly evolves into intimate warmth, and their circumstances also change, as fate has them switch roles.

To make “By Touch”, Łazarkiewicz had to, in a way, rebel against her supervisor, Krzysztof Kieślowski, who suggested numerous changes. The defense of her vision awakened in her a conscious director, as she would later recall, but also brought her even closer to Kieślowski. It was an unusual film for Polish cinema: it talked about sexual abuse by one’s father, abortion, artificial insemination, but also showed female physiology and corporeality – corporeality that is brutally objectified, for example during gynecological examinations. The film’s courageousness, fairytale-naturalist form, and its nuanced characters were noticed at many festivals in Poland and around the world – e.g. in Gdansk, Koszalin, but also at the famous Creteil International Women’s Festival, where “By Touch” received the Grand Prix from the president of the jury Bibi Anderson, who explained the jury’s decision thusly: “It’s simply a beautiful film”.

“By Touch” received the Grand Prix from the president of the jury Bibi Anderson, who explained the jury’s decision thusly: “It’s simply a beautiful film”.

The sophisticated form of her films, and their certain timelessness, don’t mean that she eschews very specific historical references. Long before Smarzowski’s “Rose” came to life, she made, in cooperation with her husband Piotr Łazarkiewicz, “Departure” (awarded a Special Jury Prize at the Gdynia Film Festival) about a mother (Halina Winiarska) who hates “Pollacks” and identifies as a German, and her daughter (Teresa Budzisz-Krzyżanowska) who sees herself as a Pole and… hates her mother. “We wanted to ask difficult questions” – said Łazarkiewicz. “Why does a man who had fought for the Polishness of Masuria before the war would then emigrate to Germany? And why do people who have vital reasons to go there – stay behind? Why was this world of strong, human friendships destroyed?”.

Łazarkiewicz likes change, she feels at home in various genres and formulas. On one hand she makes excellent Television Theatre productions, including “Klimaty” (1995), “My Mother’s Courage” (2002), and especially “Karski” (2014) which combines a contemporary point of view with reconstructed events from the life of the famous Polish emissary, which received, among other accolades, five awards at the Two Theatres Festival in Sopot (including the award for best direction) and a Special Award during the Polish Film Festival in America which takes place in Chicago. On the other hand we have TV series such as “Ekipa” (shot with her sister Agnieszka Holland and niece Kasia Adamik), a rare example of Polish political fiction, and “Into Deep Water” (made with Kasia Adamik and Olga Chajdas) which was one of the most original shows in the history of Polish public television and has received many international awards, including the Prix Italia for the best European TV series.

In 2011, Łazarkiewicz surprised everyone with the fairytale comedy “Dance Marathon” – a melancholy satire of small town Poland which takes place during a dance contest. Three years later, she made the moving documentary “Absence” about her late husband Piotr Łazarkiewicz, who passed in 2008. “I decided to make a sort of film mosaic out of the things he left behind – fragments of his films and TV Theatre productions, interviews, stories told by other people. It’s an essay on a fascinating man who was here, did something, experienced things.” – says the director.

Currently she is working on an adaptation of Janusz Korczak’s “Kajtek Czarodziej”, and in the first months of 2017 she starts shooting her new feature film “Powrót”. It will be – as she claims – “a contemporary, intimate story about difficult family relationships based on emotional abuse”.