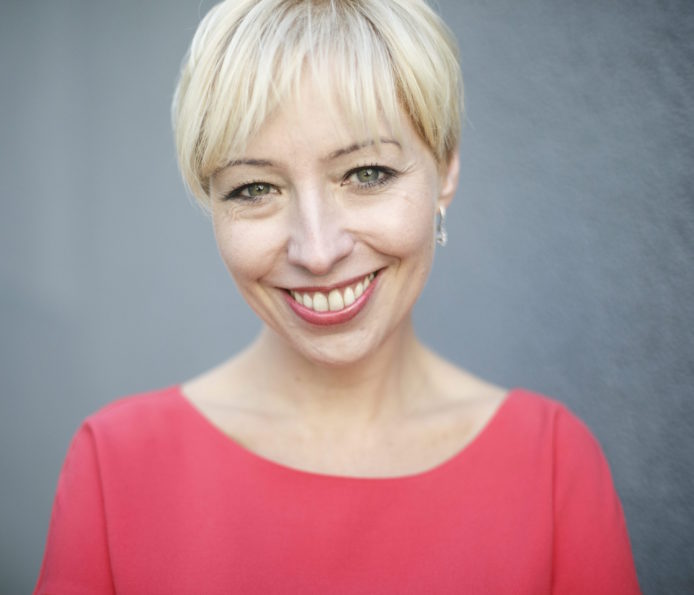 Ever since her feature debut, Piekorz remains faithful to her creative team – cinematographer Marcin Koszałka and writer Wojciech Kuczok, whose novel “The Welts”, filmed in 2004, brought her spectacular success: the Golden Lions in Gdynia and 10 nominations to the Eagles. Piekorz’s movie was also Poland’s Oscar candidate.

She is considered a director with profound insight into intimate relationships, able to show compassion to her deeply wounded protagonists

The documentary “The Girls of Szymanow”, a story of a school for girls managed by the Sisters of the Immaculate Conception, was the twenty-three-year-old director’s debut and her first success. Born in Sosnowiec, back then Piekorz was a student of the Radio and Television Faculty at the Katowice University. She observed the students’ life within the school’s cold walls, she depicted spartan conditions in which they lived, the young girls’ fears and, finally the joy surrounding the perspective of finally leaving the school.

It was only thanks to Magdalena Piekorz’s famed documentary The Girls of Szymanow (1997) that we learned about the world of monastic schools. The film also challenged the image of the modest and noble schoolgirl – wrote professor Małgorzata Szpakowska in a text about the history of coeducation in Poland, therefore underlining the importance of Piekorz’s film. It was awarded the Bronze Hobby-Horse at the Short Film Festival in Kraków.

“The Welts” were honoured with the Golden Lions award in Gdynia. Piekorz was the second woman-director to receive the prize in the history of the festival

A year later the director realized ‚Franciscan Freestyle’, which also takes place in the monastic environment and also challenges stereotypes which surround it. Its protagonists are monks from the Assumption of Mary Province Order of Friars Minor in Katowice who talk about their calling while working on the traditional Christmas nativity scene, displayed each year in the Katowice-Panewniki basilica. The word ‚freelance’ is a reference to the joyful, spontaneous philosophy of St. Francis, shared by the young protagonists.

Two following documentaries – ‚Strangers’ (1999) and ‚Labyrynth’ (2001) – were dedicated to alternative theatre. The former is about the ‚Doll Clinic’ – an artistic group which works in the quiet village of Wolimierz, the latter about ‚Theatherapy’ workshops for the disabled, organized at the Juliusz Osterwa Theatre in Lublin.

Piekorz also shot her documentaries abroad: for TVP she made the film ‚To Find, to Witness, to Bury’ (2001) about the massacre in Srebrenica and for TVN – twenty five episodes of the series ‚Chicago’ showing the ‚American dream’ of Poles living in the capital of Illinois. In Russia she worked on a documentary about contemporary nobility – ‚The Aristocrats of new Russia’ (2004).

The breakthrough came with the director’s first fiction feature: ‚The Welts’ based on Wojciech Kuczok’s screenplay, loosely adapted from his novel ‚Gnój’ (Muck) starring Michał Żebrowski, Agnieszka Grochowska and Jan Englert, won the Golden Lions at the Polish Film Festival in Gdynia.

Piekorz received them as the second woman in the history of the festival (after Agnieszka Holland). Before the premiere, the director said in an interview with ‚Wysokie Obcasy’ magazine:  This great script was written by Wojtek but I feel like the story is mine as well. The starting point was the short story ‚Dioboł’ but I begged for the ending not to be this tragic. I didn’t want the film to end with death. Wojtek agreed to write it as a story about the saving power of love, which I really cared about. It’s my first fiction feature. When I saw the locations and heard the actors’ voices for the first time, I felt like we gave it new life. It was a mystical moment for me. This contemporary drama about a thirty-year-old man who has to confront himself with his painful past, while trying to build a relationship with a woman, set the tone for the director’s following features: ‚Drowsiness’ and ‚Close-ups’.

On the set of ‚The Welts’ started the lasting collaboration between Magdalena Piekorz, writer Wojciech Kuczok as well as cinematographer Marcin Koszałka, actor Michał Żebrowski and composer Adrian Konarski. They worked together not only on films directed by Piekorz, but also on the play ‚Doctor Haust’ staged in the Studio Theatre in Warsaw.

In 2006, for TVP Katowice, the director made the documentary ‚An Interrupted Flight’ about the catastrophe that took place at the exhibition of carrier pigeons in Katowice.

Magdalena Piekorz directed her second feature in 2008, once again based on Kuczok’s script. In ‚Drowsiness’ she tells three intertwining stories about protagonists who find themselves in a difficult moment in their lives. They are all connected by the drowsiness mentioned in the title – in a literal sense, when it comes to Róża (Małgorzata Kożuchowska) who suffers from narcolepsy, but mostly understood as a metaphor. Róża as well as the writer Robert (Krzysztof Zawadzki) and doctor Adam (Rafał Maćkowiak) spend their lives ‚asleep’, in a daze, unable to make any decision which would wake them up. The film was appreciated by the audience in Gdynia which gave it its award.

The public had to wait six years for the director’s following movie. ‚Close-ups’ is another story about difficult family relations, this time between a mother (Ewa Wiśniewska) and a daughter (Joanna Orleańska). In an interview for Stopklatka the director said: – I wanted this film to be sort of a shock therapy for the audience. I wanted them to receive the message: be mindful and try to leave your egoism behind. That is why we chose this powerful final, since I felt that only this way of ending the story – actually we had multiple ideas – gives us the chance to see that reality can be different from what it seems. In this case, much different from what the loving daughter thought.  I chose such a controversial ending, because all the others made the film just a simple story. I wanted it to be something more.

While in her documentaries Magdalena Piekorz choses different themes – although she especially likes to tell stories of communities isolated from the outside world – her three fictional features are somehow similar. Just like her screenwriter Wojciech Kuczok and cinematographer Marcin Koszałka (who is also a director of personal documentaries) she gives profound insight into intimate relationships while telling stories about people from her generation who struggle with reality – it may seem they have everything (they are usually artists, writers, doctors), but they enter adulthood deeply wounded.

Piekorz uses her cinematographic experience also in the theatre. Her most important realizations are the musical ‚Oliver!’, based on Dickens’s ‚Oliver Twist’ (Teatr Rozrywki in Chorzów, 2009) and ‚Hotel Nowy Świat’ inspired by Ettore Scola’s ‚Le Bal’ (Teatr Polski in Bielsko-Biała, 2013), where Poland’s history since the 1930s until today is told only through music and dance.

2004 The Aristocrats of new Russia (documentary)

1997 The Girls of Szymanow (documentary)