Director; screenwriter; producer; author of some of the biggest box office hits in Polish cinema. “Testosterone”, an adaptation of his own play, brought him the Amber Lions award for biggest attendance at the Gdynia festival. “Testosterone” and his next film, “Lejdis”, brought over four million viewers to movie theaters. Saramonowicz is a member of the board of Directors’ Guild of Poland.

Publicist, critic, journalist, playwright, screenwriter, director, producer, author. The list of Andrzej Saramonowicz’s professions is long and impressive. But this recital could just as easily be replaced with the statement: Saramonowicz is an artist who has developed a style in commercial cinema that is vivid and popular with the audience

The “Testosteron” co-author’s cinematic fingerprint is based on both a conscious and incredibly bold play with conventions situated somewhere on the border between parody and pastiche, and his provocative writing sprinkled with perversely juicy dialogue. No wonder the audience recognizes Andrzej Saramonowicz as a brand that guarantees  not only good fun, but also a brilliant between-the-lines reflection on our social and political reality and its evolution.

The “Lejdis” writer graduated from the Department of Directing of the Wajda Film School, but his early work is suffused with a spirit of independence that consciously eludes being categorized in terms of the grammar of film – an independence amplified by his characteristic (auto)irony and a penchant for dark humor, the grotesque, or even the macabre.

His early work is suffused with a spirit of independence amplified by his penchant for dark humor, the grotesque, or even the macabre

Andrzej Saramnoowicz’s artistic output is suspended between the real world, of which he is an avid observer, and a certain cinematic abstraction that references various styles and ways of telling sometimes complex and multi-layered stories. Saramonowicz is aware that films are made mostly for the audience. The “Ciało” director seems to not only be able to sense the moviegoers’ needs, but also attempts, with a healthy dose of humor and empathy, to anticipate and shape them.

Saramonowicz’s debut comedy “Pół serio”, which was instantly hailed as a revelation at the 25th Gdynia Film Festival. It’s difficult to name a more self-referencing project in Polish cinema, one that would equally bravely and unabashedly tear down the façade of the film industry, mocking its various stereotypes. Although three friends signed their name to this film – Konecki, Madejski, and Saramonowicz – it was the last one who received a Special Jury Prize for the script. 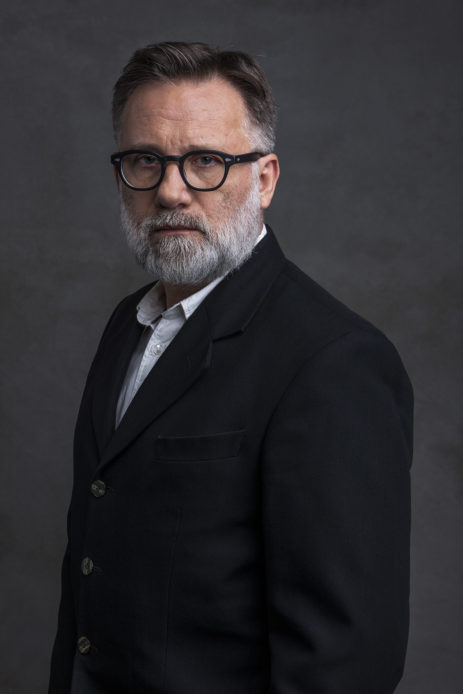 The idea for the film was born during work on a public TV program which was meant to showcase various film authors using scenes inspired by their work. The program offered tongue in cheek parodies of the styles of Pasikowski, Ślesicki, Machulski, Bergman, and Kieślowski; it also referenced “Star Wars”, and the psychoanalysis-heavy oeuvre of Woody Allen. Saramonowicz, who was behind the abovementioned program, proved that a local postmodernist game of conventions and somewhat inhibited subversiveness can amuse people just as much as the American version.

In 2003, the duo Tomasz Konecki – Andrzej Saramonowicz scored another success among critics and moviegoers. “Ciało”, awarded the prestigious Golden Duck for the best film of the year, is undoubtedly a cult phenomenon. Its authors offered Poland a distinct alternative to what had been considered comedy, moving towards grotesque and dark humor.

While working on “Ciało”, Saramonowicz also completed the core cast that would become one the trademarks of his collaborations with Konecki: from Rafał Królikowski all the way to Tomasz Karolak, Piotr Stelmaszczyk, Robert Więckiewicz, and Piotr Adamczyk, and on the female side – Iza Kuna, Edyta Olszówka, and Magdalena Boczarska, who would several years later become the stars of the hit “Lejdis”.

“Ciało” was born out of a TV program conceived by Saramonowicz – a showcase of cinema’s greats, such as Bergman or Altman, spiced up with amusing scenes that parodied their style

The real breakthrough for the creators of “Pół serio” came with the film adaptation of Saramonowicz’s play “Testosteron”, which is one of the most internationally recognizable Polish theatre productions. “Saramonowicz’s play is excellently written, it glitters with wit and constantly surprises you with various twists and turns. Contrary to the title, which suggests an apotheosis of manhood, it deconstructs the myth of the macho man,” wrote Roman Pawłowski in “Gazeta Wyborcza”.

The film adaptation of “Testosteron” came out in 2007. The film immediately became a hit. But its authors didn’t stop at just analyzing hormone-induced male behavior. Continuing their musings on the contemporary “war of the sexes” led them to create one of the most popular Polish comedies of the 21st century. “Lejdis” (2008) became a modern hymn of friendship, female solidarity, and independence.

The film’s protagonists – though beautiful and attractive – are also flawed, they make mistakes, but while they might not always make the right decisions, they are very assertive in making them. They regret nothing, always forging ahead, armed with the knowledge that what drives them is not love of men, but love of life itself. What connects “Lejdis” with “Testosteron”, aside from the motif of male-female sparring, is a kind of strong empathy that we feel towards flawed characters who speak “our language” and experience “our inner struggles”.

“Acting was always a strong point in the films of Konecki, Saramonowicz, and Madejski, which featured actors who were both popular and critically acclaimed. The stars surprise us with the maturity of their portrayals, showcasing aspects of their craftsmanship which they had been unable to reveal before,” wrote in his review of “Lejdis”, published in “Kino”, Konrad J. Zarębski.

Following the phenomenal success of “Lejdis” and “Testosteron” (over 4 million viewers combined), the artistic duo embarked on a bolder journey – a provocative satire of the absurdities of life in Poland. “The Perfect Guy For My Girlfriend” (2009) was brimming with criticism of both Catholic conservatism and radical feminism. The conflict between these opposing value systems served as the background of an incredibly original love story. Konecki and Saramonowicz’s film may have not matched the popularity of their previous endeavors, but still achieved impressive numbers (over 700 000 tickets sold). The film received the top honor at the 7th Festival of European Comedy Films in Mladá Boleslav, beating out, among others, Mike Leigh’s Oscar-nominated “Happy Go Lucky”.

Saramonowicz is the only Polish filmmaker to sign a lucrative deal with Warner Bros., who noticed the “Lejdis” author’s enormous potential.

“The Perfect Guy For My Girlfriend” has found new popularity since, and its critical reflection on the catalogue of Polish national vices remains very current. It was the last film Konecki and Saramonowicz made together. Soon after its release, the author of “Testosteron” started his own production company called San Graal (the two had previously worked as Van Worden).

At the start of 2010, the American giant Warner Bros., as part of its strategy of investing in local markets – like it had previously done in Italy, Germany, or France – having noticed Saramonowicz’s enormous potential, signed with him a lucrative deal (he was the only Polish filmmaker to be offered this opportunity). Which should come as no surprise, seeing as Saramonowicz’s films managed to beat American blockbusters at the box office for two seasons straight (2007/2008).

“Andrzej Saramonowicz is a tremendously talented screenwriter, director, and producer. That is why we are incredibly pleased to have signed a deal with him and his production company. (…) We are very happy to support Andrzej Saramonowicz in developing many interesting projects. We will thus be able to aid the Polish film industry and make a significant contribution to the development of Polish culture,” stated Richard J. Fox, then-Vice President of Warner Bros Pictures International.

Saramonowicz’s next film – “How to Get Rid of Cellulite” (2011) can be to some extent seen as an homage to the wacky comedies of errors that had made Warner Bros. a household name. In keeping with that convention, it is brimming with absurdities, but nonetheless retains a certain internal harmony that is held together by humor and excellent comedic timing. The director is once again mixing conventions, splitting his story into six chapters that offer the audience the full cinematic experience – from a dark thriller a la Brian de Palma, all the way to a musical, and neurotic, personal divagations on the nature of everyday life lifted straight out of Woody Allen’s films. The protagonists of “How to Get Rid of Cellulite” are once again women who, clad in skirts and high heels, save “their private world” from masculine doom.

“I love making films for and about women, because they’re the best subject, and the best audience. The girls from »How to Get Rid of Cellulite« are not afraid of tough challenges or facing men head-on, while also having a great time. They are teeming with unbridled fantasy, charm, and possess cunning intellect, it’s just impossible not to love them,” said Saramonowicz.

Recently, Andrzej Saramonowicz debuted as a novelist. His “Chłopcy”, an original analysis of modern relationships between parents and their children, and the question of parental responsibility, quickly became a bestseller. Currently, Saramonowicz is working on a new film project. True to his style, the director has only revealed that “for a change” his next movie will be… a comedy.

2011 How to Get Rid of Cellulite (feature film)