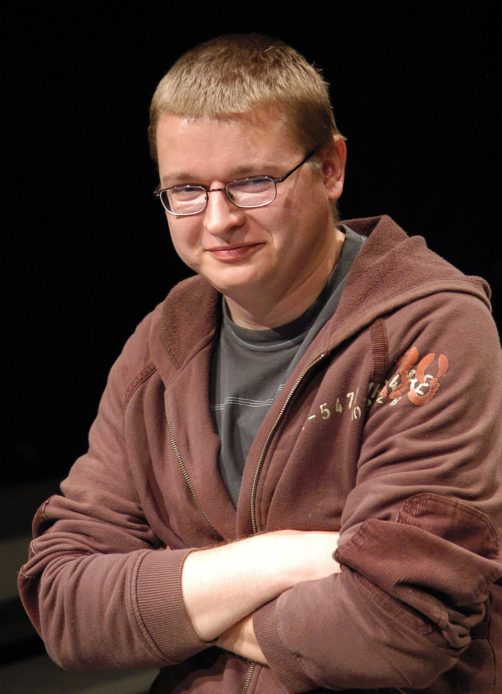 Film and stage director. All of Wojcieszek’s artistic endeavors consistently poke the hornet’s nest by contrasting Polish national mythology with modernity, conservatism with progressiveness, or traditional religiousness with social liberalism. An expert in formalist experimentation who blends avantgarde production with difficult subject matter, Wojcieszek is a regular at international film festivals.

Rebellious and irrepressible in speech and – most importantly – in his creative endeavors. Wojcieszek’s works, both cinematic and theatrical, always spark debates and shatter the prevalent stereotypes. Regularly screened at the Berlinale, his movies have won Polish awards for their originality as “generational manifestos of thirtysomethings searching for a place for themselves in our reality”

Searching for our place in this reality is the most important leitmotif in Przemysław Wojcieszek’s films. He studied Polish philology and journalism before moving on to filmmaking. His debut screenplay became Witold Adamek’s Poniedziałek (1998), starring musicians Bolec and Paweł Kukiz, while his directorial debut, the black-and-white Zabij ich wszystkich (1999), was an entirely independent production made over the course of a week in a rented flat in Wrocław. Total cost: a little over $6000.

Riots after the death of a football fan at the hands of a policeman (inspired by true events in Słupsk in 1998) form the background of Wojcieszek’s debut film.  Its main theme is the search for, as Jerzy Stuhr calls it, a positive program in his hometown’s claustrophobic, seemingly hopeless atmosphere. This is particularly true for the rebellious Ewa (Sylwia Juszczak, an actress discovered by Wojcieszek): she doesn’t want to join the rat race and focus on chasing the almighty dollar, but reducing her existence to repetitive rituals doesn’t appeal to her either.

“I don’t want to get away from here,” says Ewa in Zabij ich wszystkich. “I know it’s a shitty place, but it’s my own! I gotta try to make it out here,” proclaims Marcin (Rafał Maćkowiak), the protagonist of Wojcieszek’s next film, Louder than Bombs (2001), shot by eminent cinematographer Jolanta Dylewska. While Zabij ich wszystkich was a youthful cry of rage and rebellion, Louder than Bombs is an audacious, artistically mature tale of the clash of two generations that will never meet, but both pursue the same goal: some measure of fulfillment.

Wojcieszek brought together death and love, hope and disillusionment, Poświatowska’s poetry and the music of The Smiths (one of their tracks gave the film its title) – and, most importantly, two generations of actors: the youngest (Magdalena Schejbal’s award-winning debut and Rafał Maćkowiak) and their parents (symbolically personified by Teresa Sawicka and Michał Tarkowski, famous for their roles in 70s cinema).

Louder than Bombs was hailed as a powerful, fascinating voice of a generation and the emergence of a new, individualistic creator – a talented, passionate amateur filmmaker (Wojcieszek’s two attempts at getting into film school were unsuccessful). He was showered with awards (special prizes at festivals in Gdynia, Koszalin, and Września, as well as two nominations to the Eagles) and invitations to international festivals, including the Slamdance Film Festival in Park City, where Joanna Dylewska’s photography won the film a Kodak Vision Award. “This is the best film of the young generation,” Andrzej Wajda said about Louder than Bombs.

In defiance of Polish cinema’s tendency to bring its viewers down with bleak perspectives, deterioration of values, and the pursuit of professional success, Wojcieszek’s films were striking with their positive – at times even positivist – tone. The protagonists of his Down the Colourful Hill (2004) and The Perfect Afternoon (2005) don’t give up despite the unfavorable circumstances and their disappointment with people and the world; they want to keep fighting for an old love and their place in the world (Down the Colourful Hill) or a publishing house founded with profits from the future father-in-law’s sausage-making business (The Perfect Afternoon). They have to swim against the current to achieve their goals by metaphorically killing the internalized images of their parents and awakening a noble, slightly naïve idealism within themselves. “It doesn’t matter if my protagonist succeeds or fails at his endeavor. He strives to better himself and that’s what matters,” Wojcieszek said in an interview for the Polityka weekly.

“Louder than Bombs” is an audacious, artistically mature tale of the clash of two generations that will never meet, but both pursue the same goal. “This is the best film of the young generation,” Andrzej Wajda said about Wojcieszek’s picture

Wojcieszek’s distinct cinematic personality has been impossible to pigeonhole right from the start; critics and juries have always appreciated his powerful voice as a director, but producers and distributors couldn’t deal with it equally well. That was one of the reasons why he had to fight to produce each film and take over their distribution. Wojcieszek found a haven of sorts in theater: “I like to direct plays that allow me to quickly respond to current events – making movies is significantly more time-consuming,” he explained.

Invited to Legnica’s Modjeska Theatre by Jacek Głomb, Wojcieszek made his theatrical debut there in 2004 with Made in Poland. Considered one of Poland’s most important theatrical events of the decade, the play chronicles the exploits of Boguś, an angry young man with “Fuck off” tattooed on his forehead, who calls for a popular uprising. This award-winning drama was broadcast on public TV. Wojcieszek brought it to the silver screen five years after its stage premiere; the punky, anarchist film was well-received at the 2010 Berlinale.

Wojcieszek’s theatrical productions, often based on his own plays, relentlessly poked the hornet’s nest by contrasting Poland’s national myths with the reality of our times or traditional religiousness with homosexuality. At the same time, however, they captivated audiences with their stunningly scripted dialogues and innovative use of the inherent potential of theater (Whatever Happens, I Love You and Two Poor Romanians Speaking Polish in TR Warszawa or Darkroom and It’s Going to be Beautiful in Teatr Polonia). This hasn’t changed – Wojcieszek’s latest productions, Hymn narodowy in Legnica’s Modjeska Theatre and Polska krew in Teatr TrzyRzecze, sparked heated debates in 2016.

“Knives Out”, Wojcieszek’s latest film, is an experiment inspired by the burgeoning nationalism and hatred toward “strangers”. “I showed people who go about their lives buzzing with aggression, never thinking about the consequences of their actions,” the director said

Naturally, Wojcieszek didn’t abandon filmmaking, and formal and narrative experiments crop up increasingly often in his productions. For example, Secret (2011), screened in the Forum section of the Berlinale, was assembled from scraps, word and sentence fragments, symbols, signs, time lapses, and jump cuts. This is a story of Polish-Jewish guilt that, unlike the direct literalism of Pasikowski’s Aftermath, approaches the subject through a formalist, avantgarde experiment. That was also the case with How to Disappear Completely (2014), which was also screened at the Berlinale: untouched by editorializing, crafted out of discreet glimpses, it chronicles the nighttime encounter between two girls in Berlin as they attract and repel one another almost without words. “I wanted to snip off this awful, reeking historical context and just make a modern movie. I’m telling a love story – a story about impossible love, because it only lasts a few hours,” Wojcieszek admitted.

Wojcieszek’s latest completed film was produced at a breakneck pace – written in three weeks, shot in two, and edited in one. It’s Knives Out (2016), inspired by the political victory of the Law and Justice party and by “the hysteria around Muslims”. A group of young adults a few years out of high school meets to hang out for an evening; “The nationalist madness growing within them comes to light during this meeting,” Wojcieszek recounted. “I showed people who go about their lives buzzing with aggression, never thinking about the consequences of their actions.”

In 2015 he produced Berlin Diaries, the most surprising of his films – and the riskiest, because the subject was himself. “I’m a film director trying to retain a minimum of independence, so I constantly face poverty. (…) Poverty knows that we’ll stay together as long as I’m not a subservient little whore to clerks, critics, and movie festivals,” he says on screen, a director deciding to film his confession, intimate yet contrived, literally and figuratively baring it all before the viewers to show his unadorned self.

“Berlin Diaries is a diary; a diary of battling my own weakness and grief after the loss of a loved one, a diary of a fleeting affair,” Wojcieszek wrote about the movie. “A diary that I filmed to survive a harsh winter of my life. (…) If we approached this diary as a movie, it would be an extremely personal and existential one – a tale of an artist’s attempts to free himself from the constraints of the cinematic form, of his search for the meaning of life and art, of his return to the empty family home and his work to overcome a personal crisis.”

2014 How to Disappear Completely (feature film)

2004 Down the Colourful Hill (feature film)