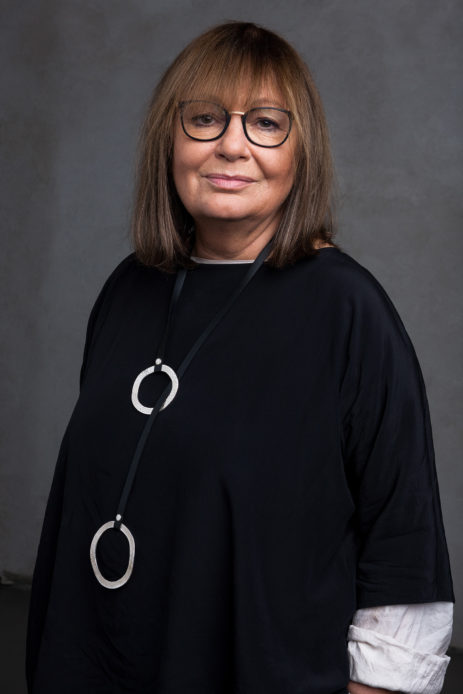 Co-owner of the ZA Agency of Actors and Film Performers, former production manager
and producer, Ziułkowska collaborated with Krzysztof Zanussi, Agnieszka Holland, Marek Koterski, and other filmmakers. She received
an Eagle for “Life As a Fatal Sexually Transmitted Disease” (2000) and the Gdynia Golden Lions as the producer of “The Welts” (2004). Honorary member
of the Directors’ Guild
of Poland.

One of the minds behind the founding of the Guild of Polish Directors, and for the first few years – the organizer of the Guild’s operations. One of the leading producers in Polish cinema, for 10 years she was the vice director of “Tor”. Film school professor, founder and owner of the “ZA” Agency of Actors and Film Professionals

After graduating from the Department of Law of the Warsaw University, she studied film production at the Lodz Film School. It was during those studies that she started her career in film, at Andrzej Wajda’s “X”, immediately entering the circle of Polish film’s A-listers. She earned her first associate producer credit on Andrzej Domalik’s “Upstairs, Downstairs” (1988), and a year later she produced her first film at “Tor” – Maciej Dejczer’s “300 Miles to Heaven”. “That film was a big challenge for me – it was an international co-production (with Denmark and France), which was rare in those days. And »Tor« – as I realize in hindsight – took quite a risk handing such a complex task to an inexperienced producer” – she recalls.

She has also worked with the Perspektywa Film Studio and the Karol Irzykowski Studio, and in terms of directors – with Marek Koterski, Agnieszka Holland, Wojciech Marczewski, Janusz Majewski, Janusz Morgenstern, Jurek Bogajewicz, Janusz Zaorski, Robert Gliński, Raodław Piwowarski, Michael Boisrond, Diana Groo, Zoltan Kamondi, and repeatedly with Krzysztof Zanussi. She has made films such as “Persona Non Grata”, “Julie Walking Home”, “Weiser”, “The Welts”, “Miracle in Cracow”, “Edges of the Lord”, “Life as a Fatal Sexually Transmitted Disease”, “Matka swojej matki”, “At Full Gallop”, “Sequence of Feelings”, “All That Really Matters”, “A Year of the Quiet Sun”, “Marie Curie”, “Destiny”, “The House of Fools”, “Inner Life”, “Childish Questions”, “The Stranger”, “Quiet Years”, “The Faithful River”, “Man of Iron”, as well as the TV series “Weekend Stories” and “As Years Go By, As Days Go By”. She has also consistently supported young filmmakers – including Przemysław Wojcieszek (on his feature debut “Kill Them All”), Jacek Borcuch, Łukasz Barczyk, and Grzegorz Lipiec’s amateur group Sky Piastowskie.

While Iwona Ziułkowska had an invaluable role in the creation of numerous excellent, widely acclaimed movies, she left the production industry to become an agent. “I feel I’m working for a good cause and on the side of the angels,” she quipped

Iwona Ziułkowska has played an invaluable role in the creation of many excellent and highly acclaimed films, including numerous international co-productions (with France, Canada, Germany, Denmark, Hungary, Italy, Switzerland. the United States, Israel, Russia, Austria, Kazakhstan, Uruguay, Argentina, and Sweden). Twice she received the Gdynia Golden Lions for the producer of the best film – in 2000 (for “Life as a Fatal Sexually Transmitted Disease”) and in 2004 (for Magdalena Piekorz’s “The Welts”). In 2001, she won the Eagle – the Polish Film Award – for the Best Film Producer of 2000. The last film she produced, Krzysztof Zanussi’s “Persona Non Grata”, was – as she recalls – one of the most challenging she had ever done, seeing as it was shot in Poland, Russia, Uruguay, and Argentina, and was a joint Polish-Italian-Russian production made in cooperation with Argentina, Uruguay, and Chile.

“It’s a great pleasure to work with such incredible and talented artists” – says Iwona Ziułkowska. “I feel like I’m fighting the good fight, and fighting it on the right side.”