Director and lecturer. His “You Are God” (2012), story about polish hip-hop group Paktofonika, was one of the biggest commercial successes in polish cinema, gathering an audience of 1,4 million people. This move was also nominated for Eagles – Polish Film Awards in 10 categories and the director himself has received an Award at Gdynia Film Festival. His first movie
– “My Name Is Ki” (2011) was honored at Koszalin Film Festival for Young Cinema.

Both of his feature films made a splash – My Name is Ki was proclaimed a new voice that refreshed stagnant conventions, while You Are God transcended the boundaries of a generation manifesto. He could have followed through, he could have tried to capitalize on his success as fast as possible… But no. He’d rather pause and step into another realm – television plays or ambitious drama series – in order to broaden his technical range, change the register of artistic expression, and, most importantly, try his hand at an endless progression of genres and forms. Leszek Dawid isn’t in a rush, but there’s a touch of restlessness about him; you never know which way he’ll go next.

He arrived at filmmaking from an adjacent, but completely different realm – still photography. At 13 he was given his first camera, a Soviet-made Fed 3 reflex camera. His uncle taught him to take and develop pictures; Dawid was instantly hooked. “I saw that you could trim the world in the viewfinder frame, you could interpret it and select the fragments you wanted to show. I was intuitively, not entirely consciously aware of the great power of this medium,” he recalled many years later. There’s only a small step from still photography to filming, it seems like wholly logical progression, but Leszek Dawid didn’t start studying direction right away. First he got a degree in English at the Wrocław University. 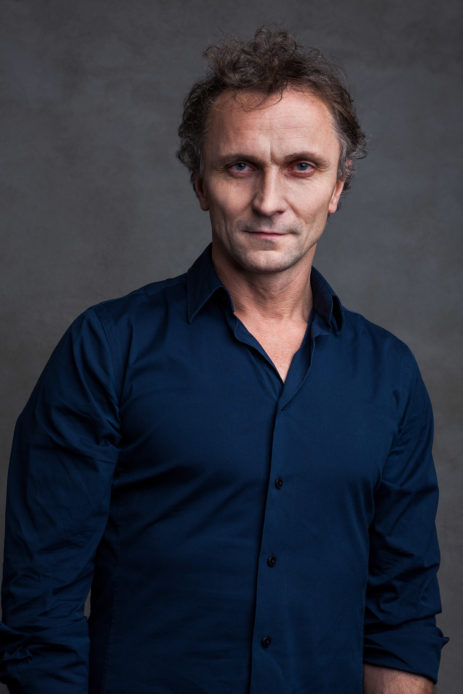 Perfectly content as a professional English teacher, he didn’t need a new job, but decided to study at the Lodz Film School. As a photography afficionado Dawid considered the department of cinematography, but changed his mind after going to Łódź and visiting the school in person. Several years later he returned and chose the direction department. There he met his heroes. Kazimierz Karabasz helped him discover the power of the documentary, but Wojciech Marczewski’s master classes made the greatest impression on the budding director: Marczewski persuaded his students to always leave something of themselves, a “personal fingerprint,” on every work.

“I saw that you could trim the world in the viewfinder frame. I was intuitively, not entirely consciously aware of the great power of this medium”

Things didn’t exactly go according to plan. Dawid was expelled in the second year of his studies, mostly due to his innate stubbornness. He took it as a lesson in humility and an opportunity to reflect if he really wanted to do this. One year later he returned to Łódź and made his acclaimed student film Bar na Victorii. The movie took him back to his hometown, Kluczbork – the protagonists were his childhood friends and now he followed them to London. He had his camera, they were hoping to find work. He successfully merged a story of two specific people with a broader narrative about economic migration, but Bar na Victorii was completely free of impromptu punditry. Even this early movie shows the subjects closest to Dawid’s heart: a desire to change one’s life (like in his feature short Moje miejsce), escape into another world where it’s possible to lead a better, fuller existence. Roads also feature prominently in his works – one of his documentaries, significantly titled On the Road, chronicles the stories of hitchhikers Dawid himself picked up. He was close to his protagonists – maybe as close as it gets.

The same factors can be seen in his feature films. His debut, My Name is Ki, seemed a groundbreaking achievement in Polish cinema, chiefly thanks to its titular protagonist, gallantly portrayed by Roma Gąsiorowska. Even though Ki has a baby, she doesn’t intend to stop partying her heart out, thinking she can handle both. She gets a crash course in maturity and arrives at the end of the movie a changed person. You could call the protagonist infantile, Gąsiorowska’s acting manner could even set your teeth on edge, but over the course of the story you would grow fond of this girl and discover she mattered to you. This was a joint victory of the actress and the director.

My Name is Ki was well received at Off Plus Camera in Krakow, Koszalin Debut Film Festival, in Cottbus, and at Polish film reviews in Toronto and Paris. However, it was his next movie that brought him into the cultural mainstream. You Are God was the long-awaited story of Magik, the frontman of the cult hip hop crew Paktofonika, considered by many to be the most important musical group of today’s late-30s generation. Dawid’s movie follows a young man rebelling against his life and the reality around him, while simultaneously chronicling the period of political transformation in Poland viewed from Silesia, which tried – often unsuccessfully – to remake itself into a new, more appealing place. Marcin Kowalczyk’s Magik starts out as a regular boy-next-door type, evolving over the course of the film to resemble doomed rock stars like Ian Curtis of Joy Division. Paktofonika’s other two MCs, Rahim and Fokus, were portrayed by Dawid Ogrodnik and Tomasz Schuchardt, then at the start of his acting career.

Dawid is currently working on several projects at once. He is planning a film about jazz composer Krzysztof Komeda and tragic expedition to Broad Peak. Then back to low-key stories

You Are God packs a tremendous punch, but what’s most impressive about it is Dawid’s departure from the conventions of “rock cinema”: he decided to retell the story of Paktofonika in his own fashion. Both Rahim and Fokus approved the screenplay and the finished movie. You Are God was one of the biggest box-office hits in Polish cinema after 1989, attracting 1.5 million moviegoers. Of all Polish movies, this one is also the most frequently pirated and downloaded on the Internet.

Television plays also gave him an environment to explore his passions. Petr Zelenka’s Endangered Species, awarded the main prize at Sopot’s Two Theatres festival, is the most important of Dawid’s stage productions. For the purpose of theater plays Dawid dials down the emotions, striving to faithfully follow the protagonists and tell their tales with maximum clarity. This was the case with Krzysztof Bizio’s Komety, which was close to becoming a TV movie.

His newest work, the second season of The Pact produced for HBO, premiered in the fall of 2016 to very positive reviews. Critics point out that The Pact, much like Łukasz Palkowski’s Belfer, is an example of a good new trend in Polish crime shows.

Dawid is currently working on several projects at once. One film was intended to chronicle the friendship between writer Marek Hłasko and composer Krzysztof Komeda, but over the course of preparing the screenplay (authored by Mikołaj Łoziński, a brilliant young novelist) he discovered that the entire story was centered on the composer. Thus, Dawid started making a movie about Komeda himself. He notes that his idea predates the current resurgence of interest in the artist (as evidenced by Magdalena Grzebałkowska’s book and Lena Frankiewicz’s play). He’s also documenting locations for a project depicting the 2013 expedition to Broad Peak. “We’re not going to play detectives or assign blame for the tragic outcome of the expedition. The storyline revolves around the life of Maciej Berbeka – the mountains were his destiny, they kept him spellbound for 25 years. We’ll take this opportunity to consider the meaning of Himalayan mountaineering, the factor that makes people like Berbeka keep returning to the mountains.”

Leszek Dawid is planning to go back to low-key stories if these two projects are delayed. He’d like to adapt Ignacy Karpowicz’s acclaimed Fish Bones in collaboration with the author of the novel. Another movie will depict the complex relationship of an older man and a younger woman. What will they have in common?

“I think that fairness requires standing with the protagonists. Their presence on screen is their sole possession. A decent creator respects their right to their own voice,” Dawid remarks. We should keep his words in mind.

2003 A Bar at the Victoria Station (school etude)

MocArt RMF Classic for Event of the Year

2004 A Bar at the Victoria Station