Director, screenwriter, lecturer. For his feature debut „Sunday Pranks” (1983) was awarded in Koszalin and Gdańsk. His shocking „Hi Tessa” (2001) was appreciated by public and critiques (Golden Lion in Gdynia, Special Prize of the Jury in Karlovy Vary and Golden Duck for Best Film). From 2002 he is a lecturer at Directing Department of Lodz Film School, from 2008 to 2012 he was also the rector.

Eager to make movies for and about young people ever since his feature debut, “Sunday Pranks”. This gave him a unique position in Polish cinema

Robert Gliński has held numerous positions throughout his career – he was the dean of the Łódź Film School, the director of the Powszechny Theatre in Warsaw, a member of the Cinema Committee, director of the Indeks Film Studio. However, Gliński has always felt the most fulfilled on a film set.

Every time I heard him talk about his work on the set, his eyes light up. He knows that making films is about passion, that film is the most brilliant time machine designed to tell fascinating stories. That is why, in Gliński’s films, history written with a capital “H” meets a more intimate way of storytelling. Grand history is usually treated without excessive prostration, put into a surprising context, the historical events shine with a reflected light, not in a direct, explicit way.

This kind of perspective could be observed in Gliński’s debut feature “Sunday Pranks”, and in the way Gliński told the life story of his characters, Ola and Aleksander Wat in “All that is the most important…” However, Gliński’s storytelling becomes the most poignant in films about regular people and their everyday problems, like in “Hi, Tereska”. The characters from this movie have haunted us for years.

In Gliński’s films, history written with a capital “H” meets a more intimate way of storytelling.  Grand history is usually treated without excessive prostration, put into a surprising context

Today, Robert Gliński is 64 years old. Before he went to the Łódź Film School, he graduated from architecture at the Warsaw University of Technology. Architecture turned out to be a great warm-up for Gliński’s analytical mind. At the beginning of his studies in Łódź, Gliński was interested in documentary filmmaking, but he lacked the humility, the will to patiently observe the world. He preferred to act, to interfere with reality rather than just wait for life to provide him with the perfect scene. Gliński himself said many years later: “I wanted to bend reality”, which does not mean that he did not have a natural sense of curiosity about the world, that he did not care about his environment, or about his childhood memories.

His feature debut, the almost hour-long “Sunday Pranks” is a great proof of Gliński’s sensitivity – it takes place in a typical Warsaw backyard surrounded with tenement houses. After the news of the death of Stalin spreads, the children who heard it start to brilliantly imitate the behaviour of the adults to make sense of this historical event. One of the children is the fat Józio, who claims that he is going to Stalin’s funeral while proudly decorating himself with the military medals that he stole from his father. At a certain point in the movie, the titular Sunday pranks slip out of control and violence ensues. 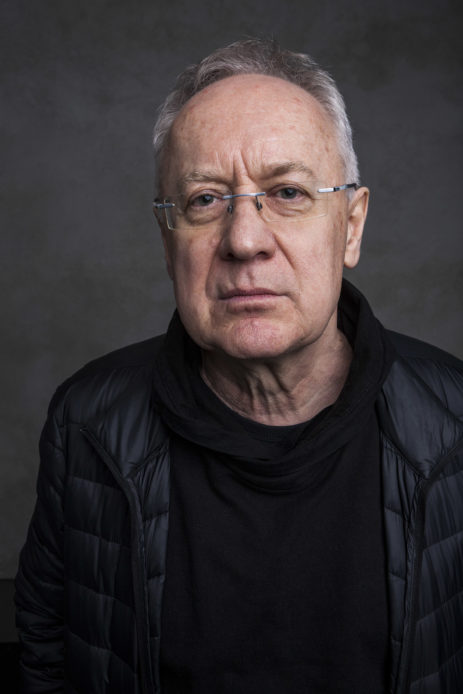 Gliński’s debut feature, shot on black-and-white tape was a showcase of his unapologetic style. The film was considered very politically engaged, it was shot not long after the end of the martial law in Poland, which is why it waited for five years before it was released. With his debut feature, Gliński gained not only the respect of his colleagues, but also recognition all over the world. He received the FIPRESCI award at the Mannheim Film Festival and the famous Museum of Modern Art (MoMA) in New York chose his film for their “New Directors/New Films”, which was proof that the up and coming young director was an exceptional talent.

From the very beginning of his career, Gliński managed not to fall into any artistic repetitiveness, however, his second film “Poisonous plants”, made for television, was set in the 1950s as well. The protagonist, a young journalist by the name of Adam (played by Bogusław Linda). In this film, we can see a clear inspiration with the cinema of moral anxiety. Gliński also had great intuition when it came to his choice of actors – Bogusław Linda, Ewa Błaszczyk and Katarzyna Figura created great roles in “Poisonous plants”.

After a period of making short features for television, Gliński came back to making documentaries. In “Prisoner 94287” and “No 181970” he told the story of two prisoners of Auschwitz and Birkenau. In “Me – the Jew”, shot in the Kazimierz neighbourhood in Cracow, Gliński’s protagonist was a young Jew who wanted to the roots of his religion and his identity. After exploring such a bleak time in our history, Gliński felt the need for a change of tone.

“Swan song” – the first full-length feature by Gliński, was a full-on comedy. What is more, the film was auto-thematic, which, for a filmmaker that young, is an amazing extravagance. The main character of the movie is a young screenwriter, Stefan, played with a charming unceremoniousness by Jan Peszek. Stefan is trying to write the next super hit, but he is being stopped by his writer’s block and a chain of surprising, often absurd coincidences.

The artfulness of “Swan Song”, which is still a good watch after all these years, is a reminder that Gliński has always appreciated the craft of filmmaking and knew how to make genre movies. Apart from a comedy, he made a science-fiction movie, “Supervision” or a light comedy “Love and Do What You Will”, in which he discussed the phenomenon of disco-polo music. Gliński also made a psychological drama (“My Mother’s Mother”) with amazing female roles – Joanna Żółkowska, who plays the non-biological mother and Krystyna Janda who plays the biological mother of Maria Seweryn’s character. Gliński also made an adaptation of Guenter Grass’ “Call of the Toad”, “Benek” – a nostalgic story set in Silesia and “Piggies”, in which he wanted to show in an unapologetic way the problem of underage prostitution. Finally, Gliński is also the author of the film adaptation of “Stones for the Rampart”, a cult novel telling the story of the Warsaw Uprising, where his goal was to inject modern-day mentality into the characters of Rudy, Zośka or Alek. Gliński also directed numerous television theatre and live theatre plays. There were periods in his life when he devoted himself only to theatre, where he soon gained as much recognition as he earlier did in film.

I am certain that I am not the only one to favour Gliński’s two films. The first one would definitely be “All that is the most important…”. In this heart-wrenching story of the love between Aleksander and Ola Wat, based on her novel, we see the world through her eyes. Together with Ola, we experience the exile to the Kazakh steppes (the movie was shot in the real setting), where, deprived of any means to live, she struggles for her and her son’s survival. She also never abandons hope that she is going to be reunited with her beloved husband, arrested by the Soviets. The film, played beautifully by Ewa Skibińska, Krzysztof Globisz and the young Adam Siemion, was shot as an epic period piece, but it has a rare emotional power, an exceptional focus on characters, on their inner life. One of the topics within the movie is the fate of an individual in confrontation with the deadly machine of history.

Another exceptionally poignant film by Gliński has to be “Hi, Tereska”. The movie is shot in a highly realistic way. The main characters are two young girls from the projects, who are desperately trying to find their way in life. The movie strikes with its realism, the main actresses are amateurs and they come from a very similar background as their characters. One of the two young actresses never managed to escape from her pathologic background. Instead of touring film festivals with the crew and other cast members of “Hi, Tereska”, she was held at a youth detention centre. Robert Gliński’s cinema has two very different faces. I am curious to see his newest film “Be Prepared”. It is described as a psychological thriller set on a scouts’ summer camp. This field of interest comes as no surprise, ever since “Sunday Pranks”, Gliński has often chosen to tell stories about and for young people and that what has made him a household name in Polish cinema.

2014 Stones for the Rampart (feature film)

1997 Love Me and Do Whatever You Want (feature film)

1992 All That Really Matters (feature film)