She draw attention home and abroad with short film “You Are There” (2004). For “Ode to Joy” (2004) co-directed with Maciej Migas and Jan Komasa, she won the Special Jury Prize at Gdynia Film Festival and at Koszalin Film Festival for Young Cinema. Her documentary “The Sidetrack” (2009) received President of Polish Television Award at Cracow Film Festival. Her new film “The Word” was a Polish-Danish co-production, She sits in the Board of Directors Guild of Poland.

She loves putting her protagonists up against unattainable dreams and ideas. Every film she makes is met with worldwide critical acclaim; for example, “The Word” was extremely well received in the Generation section of the Berlinale

Before graduating from the Lodz Film School’s department of direction, Kazejak, a director and screenwriter, dabbled in film studies. Considered one of the most interesting Polish filmmakers of her generation ever since her earliest short films, Kazejak won dozens of awards as her pictures were screened in Berlin, Rotterdam, Moscow, Cottbus, and a number of other festivals.

“If I had a magical gingerbread cookie, Anna Kazejak would be second in line for Polish Film Institute funding – right after myself,” said Władysław Pasikowski as he presented her with the Grand Prix for A Few Simple Words (2007) at the Łodzią po Wiśle festival 10 years ago. Agata Kulesza’s excellent performance as the mother set the pace of this short film; Kazejak’s graduate production showcased Kulesza’s talent 4 years before Smarzowski’s Rose and 6 before Pawlikowski’s Ida.

Kazejak was the first Polish filmmaker to discover Agata Kulesza’s talent – long before her roles in Smarzowski’s Rose and Pawlikowski’s Ida.

The mother in A Few Simple Words is always in a rush, always running away, doing part-time jobs, moving apartments, taking chances. Her daughter (Marlena Kaźmierczak), suffering from the lack of stability in her daily life, asks: “Do you have no imagination whatsoever?” Eventually they’ll trade places in the finale, the daughter resorting to a bratty gesture, the mother shedding her mask of an overgrown teenager. That’s development – even if the titular simple words are just the beginning of the protagonists’ potential transformation.

“I made a film about a woman who doesn’t want to grow up,” Kazejak explained. “My protagonist tries to be a bit of a nonconformist, a bit of a hippie – but she makes her daughter and herself miserable with her hijinks. Both Agata Kulesza and I have children, so we tried to stand up for this character: I’m showing someone who’s seeking freedom at any cost and is unable to set any limits for herself in the process.” This excellent short film won dozens of awards at festivals around the world – in New York, Philadelphia, Bologne, Potsdam, Warsaw, and more – but it  wasn’t Kazejak’s first successful venture.

Most of her earlier shorts, made during her time at film school, were set in Silesia (the director was born in Bytom), unfolding in cramped flats in grimy apartment buildings or against a backdrop of mineshafts. Unemployment, emigration, and miner strikes – all hot topics at the time – were reflected in her storytelling. However, Kazejak doesn’t make films about social issues – her clear-eyed depiction of reality ultimately serves as a starting point for tales about people: a little frustrated, a little naïve, easily succumbing to apathy, but equally quick to regain their zest for life. 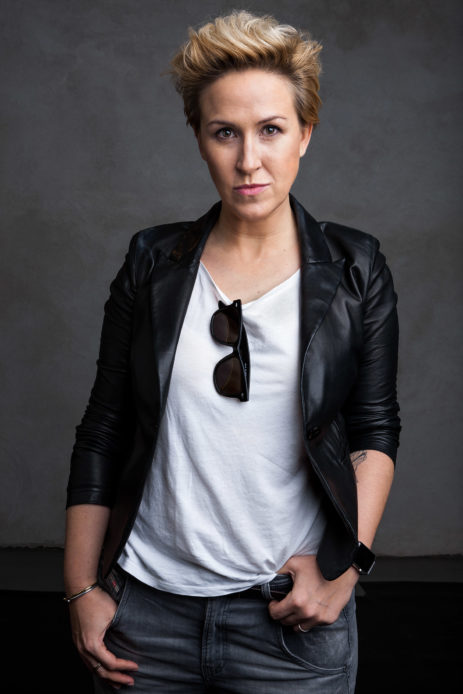 The director observes relationships: always fractured, often imposed by external forces. Her main focus is putting her protagonists up against dreams and ideas that their lives just can’t attain. As the aged protagonist of her 2009 documentary, The Sidetrack, tells her sister during their holiday stay in a converted train car, “True happiness is waiting for happiness when you’re young and everything seems possible. It’s not until later on that you see life’s a series of ups and downs.”

In Kazejak’s widely acclaimed (including the Grand Prix at Cottbus, Tbilisi, and Kosovo) 2004 short You Are There, Marlena, a lonely, rebellious teenage girl, yearns for true intimacy. Her classmate forces her into sex; her female friend demands kisses; her mother orders her to accept her stepfather. The teen decides to go to Germany to live with her father, but the man turns out to be a myth: Marlena’s mother kept his death from her for years. The myth in Silesia, Kazejak’s part of Ode to Joy (2005), is emigration – trying to escape the hopelessness of Silesia, the protagonist (Małgorzata Buczkowska) goes to England in search of work. While she saves a bit of money (that she’ll shortly lose), she also feels disillusioned: cleaning toilets was pretty much all that England had to offer.

Ode to Joy is unusual in itself, born from the energy of three film students (Anna Kazejak, Jan Komasa, and Maciej Migas) who didn’t want to wait for their feature debuts. At first there were four of them, meeting in pubs and rented flats, discussing their future in direction and the opportunities for young people at the time when a fierce debate about Generation Nothing raged across Poland. Spurred mainly by Kazejak’s determination, three of them ultimately decided to make a movie: low-key, shot with a digital camera, made up of three thirty-minute segments linked by the topic of economic migration and storyline threads. Their success exceeded their expectations – first they won Akson Studio’s script contest, then the Special Jury Prize in Gdynia. Eventually, they were invited to Rotterdam, making Ode to Joy the first Polish movie screened as part of IFFR’s main competition.

Anna Kazejak’s individual feature debut, Flying Pigs, premiered in 2010, inspired by a press article about German football fans who decided to offer their cheering skills for hire after their club folded. In the words of one of the protagonists – who rescheduled his wedding because of a match – being a supporter “is a nice and harmless mental illness – as long as you realize it’s an illness.” Neither Oskar (Paweł Małaszyński) nor Mariusz (Piotr Rogucki) are able to grow out of it, even though the football stadium seems like their refuge from adulthood. However, they’ll both have to face it and make some hard decisions – after Oskar “betrays” his friends by cheering for a rival club for money, he’ll have to walk naked through the city center.

Co-directed by Anna Kazejak, “Ode to Joy” became the first Polish film to be screened in the main competition of the Rotterdam film festival

Kazejak soon confirmed her directing chops working on the TV series Without Secrets (2011-2012) with a star-studded lineup that included Krystyna Janda, Janusz Gajos, Magdalena Cielecka, and Marcin Dorociński, and – most importantly – on her second feature, The Word, co-produced with Denmark. The film owes its excellent editing to Morten Hojberg, the editor of Lars von Trier’s Nymphomaniac and The Five Obstructions.

The Word develops Kazejak’s main subject: the painful transition from childhood to adulthood. The movie follows a group of teens that occasionally get drunk and skinny dip or race shopping carts, focusing on two of them – Lily (Eliza Rycembel) and Janek (Mateusz Więcławek). Lily doesn’t want to follow the crowd: unlike her friends, she doesn’t drink, swear, or wear heavy make-up, and takes kisses extremely seriously. Deeply in love with Lily, Janek meekly caters to her whims. When the subject of murder suddenly crops up in their conversation, it seems like a bout of edgy emotional wrestling at first – but Lily is serious about the idea and the overwrought Janek decides to carry out the cruel deed.

Though Andrzej Chyra, Magdalena Popławska, and other famous stars appear in The Word, the leading roles were played by non-professional actors. This was their first experience with film; Mateusz Więcławek was later cast in Arkadiusz Jakubik’s Prosta historia o morderstwie, while Eliza Rycembel starred in Jacek Lusiński’s Carte Blanche, Anne Fontaine’s The Innocents, and Agnieszka Glińska’s #WszystkoGra. “I like to discover new faces, even if working with non-professional actors is different and often more difficult,” Kazejak said.

The Word was very well received at the Berlinale (where it was screened in its Generation section), acclaimed by Danish and Polish critics, and won awards in Gdynia, Vienna, Moscow, Valencia, and a number of other festivals. Although loosely based on true events (Anna Kazejak and Magnus von Horn familiarized themselves with court documents and police reports on young offenders while working on the script), The Word keeps its distance from brutal realism and crime film tropes alike.

Viewers observe Lily from afar – she’s impenetrable, the external perspective additionally emphasized by photography, editing, and sound. “It’s not ‘whodunit’ that matters in my film, but ‘what drove the protagonists to these particular decisions’,” Kazejak said. “I try to have a keyhole view of reality; I start out with portraits of the teens, their emotional upheavals and overstimulation. Then the door opens wider and we see the space around the people in their environment, including the generation of their parents. This film is also about them.”

Anna Kazejak is currently working on a new project. Kaja, the protagonist of Fear, tries to save her marriage by moving to the Bieszczady mountains, but realizes that the relationship had been dead for a long time. She gradually regains her voice and self-awareness, mostly thanks to Tariq, a Middle Eastern refugee she meets in the mountains. “It’s a story about searching for oneself and coming out of an internal identity crisis,” the director stated, “but also about overcoming fear – fear of the new and unknown as well as of the Other.” The script was developed in part over the course of the Scripteast screenwriting contest; the shooting is scheduled to begin in 2017.