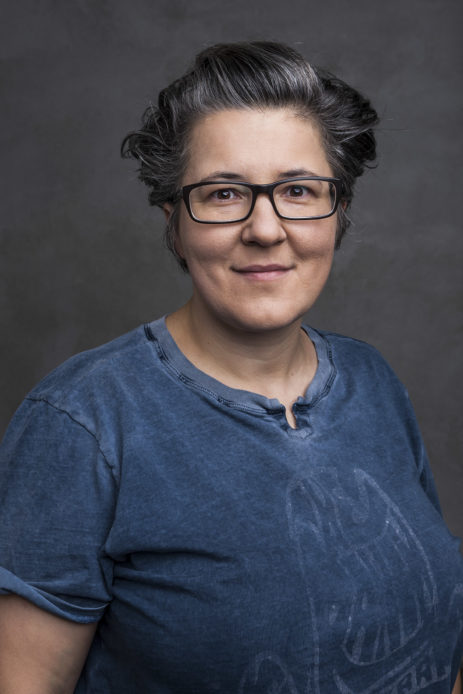 Director, storyboard and visual artist. Her debut “Bark!” (2002) was nominated in Sundance for Grand Jury Prize and received the Special Award at Warsaw International Film Festival. For “The Offsiders” (2008) she granted the Audience Award in Gdynia. Her new movie “Amok” was released March 24th. Member of European Film Academy.

Successful author of cinematic productions as well as TV series (for HBO and other stations.) Both lines of work brought her worldwide acclaim. With over two decades of experience with film sets, she started out as a storyboarder: “Storyboards are a great learning tool for directors. With literature – the script – as your starting point, you get straight to thinking with framing and editing”

She didn’t want to become a director, even though movies were in her blood – her family, both immediate and distant, is full of filmmakers, including her parents, Agnieszka Holland and Laco Adamik. At 9 years of age, during martial law, she left Poland with her mom and spent many years in France, Los Angeles, and then Brussels, at that time the center of the world of comics – Adamik graduated from the Comics Department at Institut Saint-Luc.

Still, constant talk of movies at home and frequent visits to film sets left their mark: Adamik quickly caught the movie bug. As early as 1993 she was Agnieszka Holland’s assistant for The Secret Garden, but storyboarding became her main focus. She collaborated with numerous directors, including Baz Luhrman (Romeo + Juliet, 1996), Pitof (Catwoman, 2004), Luis Mandoki (Angel Eyes, 2001, and Trapped, 2002), Scott Hicks (Hearts in Atlantis, 2001), as well as Agnieszka Holland (Total Eclipse, 1995; Washington Square, 1997; In Darkness, 2011) and Magdalena Łazarkiewicz (Na koniec świata, 1999). “Storyboarding is an excellent school of film directing,” Adamik admits. “Taking literature – the script – as your starting point, you can frame and edit it on paper. You can influence the shape of a movie without taking on the responsibility of direction.”

In 2002 she directed her feature debut, Bark!, in the United States following a seemingly fairytale event: at the party celebrating Andrzej Wajda’s honorary Oscar for lifetime achievement Adamik was approached by a Hollywood producer. He said, “You know everyone here and I know and adore your storyboards. I have a very interesting script and I’d like you to direct this film.” Indeed, the script proved amazing, Adamik was excited to take it on, and production started mere months later. 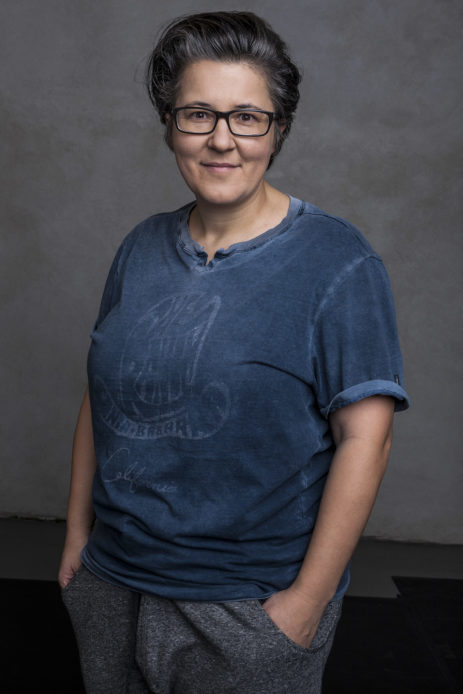 Heather Morgan, who wrote the script (which, as it turned out, was largely autobiographical), played the leading role. Her Lucy, attacked at every step by human callousness and malice, gradually withdrawing from life, eventually assumes the identity of a dog: she barks instead of speaking and sniffs people instead of greeting them with a friendly gesture. Peter (Lee Tergesen), her husband, wants to pierce her safe cocoon of doglike behaviors with the help of an initially skeptical veterinarian (Friends star Lisa Kudrow).

“We set out to make a black comedy which would simultaneously be very realistic and touch upon a profound human tragedy,” the director reminisced. “We treated the plot symbolically, as a metaphor for depression and nervous breakdown, as well as the slow process of developing acceptance of a loved one’s illness – an illness that you can’t comprehend. To our surprise, almost every festival screening had at least one person approaching us with a similar story about a close relative or friend; they perfectly grasped the psychological problem.”

Her feature debut, an American production “Bark!” premiered at the Sundance Film Festival. Its enthusiastic reception translated into screenings at nearly150 festivals around the world

Bark! was done fast, cheaply (on an approximately 700 000 dollar budget), using then-cutting edge video technology (before the advent of the HD era), and with a group of friends and acquaintances. That group included cinematographer Irek Hartowicz and actors Vincent D’Onofrio (The Cell), Mary Jo Deschanel (The Right Stuff), and Lisa Kudrow, who became friends with screenwriter Heather Morgan in the early 90s as they both starred in the legendary Groundlings Theater. “It was beginner’s luck,” Adamik recalled. “Great source material, amazing actors, and a lot of fun playing around with conventions.”

The movie premiered at the Sundance Film Festival. Its enthusiastic reception translated into screenings at nearly150 festivals around the world, including Moscow, Karlovy Vary, Munich, and the Warsaw Film Festival, where the director won a special mention. At that point Variety placed Kasia Adamik on its 10 Directors to Watch list as a filmmaker whose career merits closer attention.

Shortly after that Kasia Adamik and Agnieszka Holland started working on Janosik. A True Story. “It was my dream project,” Adamik admitted. “Even as a teen I loved the character of Janosik. This project allowed me to return to my Slovak roots and participate in a large-scale historical adventure drama production for the first time.” Unfortunately, financial problems halted the production before shooting was even halfway done. Janosik was finally completed in 2009 – nearly nine years later.

The protagonist of Kasia Adamik and Agnieszka Holland’s Polish-Czech-Slovak-Hungarian coproduction doesn’t resemble a hulking strongman: he has Vaclav Jiráček’s boyish charm, is modest and nonchalant at once, both immersed in Highland folklore and apart from it. He turns out to be an anti-hero who doesn’t live up to his myth. The legend of Janosik is greatly important in Poland; while evidently ironic, this cinematic take on the story is tinted with tragedy – the closer to the end, the more Janosik’s world becomes an absurd, naturalist spectacle of chaos and pointless death.

Earlier – in 2008 – Kasia Adamik made a feature film in Poland: The Offsiders, inspired by a news item on a football tournament for the homeless. A Polish movie executed with Hollywood grandeur, with a clear artistic signature, while sticking to the conventions of narratives about losers succeeding against all odds.

The Offsiders seems like a fairy tale about marginalized people pushing up from rock bottom, like Jacek (Marcin Dorociński), once a promising footballer, now homeless at Warsaw’s Central Station, where he meets a plethora of similarly maladjusted characters: a former sailor, miner, priest, and even an ex-philosopher. Jacek decides to start coaching them and form a homeless men’s football team. “I’m not sure where I got that from,” the director admitted. “I don’t feel homeless – on the contrary, I’m at home everywhere in the world. But I’ve lived in so many places that I can honestly say that homelessness looks the same worldwide. The line between having a home and ending up on the street is much thinner than we usually think.”

The Offsiders won three prizes at the Gdynia festival, including the audience award. It received three nominations to Eagles and was screened at many festivals in Poland and abroad, marking a turning point in Marcin Dorociński’s career: he soon became one of the most popular and acclaimed Polish actors.

Kasia Adamik was very active in TV production over the last 20 years as well, from working on adaptations of world-famous plays directed by Jan Klata (H., 2006), Krzysztof Warlikowski (The Tempest, 2008), or Mariusz Treliński (King Roger, 2007; Iolanta, 2013), through collaborating on TV movies (including Burning Bush and a modern version of Rosemary’s Baby), to – most importantly – TV series.

The list of her most important series includes Pitbull (2007), The Border (2014), and Krew z krwi (2014-2015), but the biggest two are Prime Minister (2007) and Into Deep Water (2011-2013) produced in collaboration with Agnieszka Holland and Magdalena Łazarkiewicz. These shows remain two of the most original Polish TV series of the last decades – Into Deep Water received the Prix Italia for best European TV drama series, while the political fiction Prime Minister proved prophetic in many respects (partly thanks to the outstanding screenwriting of Wawrzyniec Smoczyński and Dominik Rettinger). Not just in the plane crash subplot, but also with regard to the hottest subjects in contemporary Polish politics – from taxes to citizens’ initiatives.

Right now Kasia Adamik is wrapping up Season 2 of The Border, but she’s focused on finishing her third feature film – Amok. Though conceived as an international production, in the end Amok was filmed in Poland with a Polish cast and crew. “I don’t like it when actors speak English with a fake foreign accent,” Adamik explained. “Besides, this story happened in Poland and I wanted to maintain this national flavor on several levels.”

Adamik was inspired by the case of Krystian Bala, who was convicted of murder and sentenced to 25 years in jail in 2007. Bala’s trial garnered international interest – the sentence was based on circumstantial evidence, including his book, titled Amok, which contained a graphic description of a crime surprisingly similar to the murder he was charged with. (The court ultimately dismissed this particular piece of evidence.) Richard Karpal’s script used these facts as a starting point – this is a tale of two men, the policeman Jacek (Łukasz Simlat) and the accused Krystian (Mateusz Kościukiewicz) locked in a psychological duel.

“This is a film about obsession,” Adamik says. “Both self-obsession and obsession with freedom – freedom from moral guidelines and social order. Krystian assumes the stance of one completely liberated from socially imposed morality through philosophy. The policeman finds this freedom impressive and even enviable, because he feels restricted in many respects.”

Amok is supposed to be just like its scenario – very visual, gloomy, but also steeped in film noir  conventions, which, as the director says, “allow us to detach from realism and use images for storytelling”. The film was shot by Tomasz Naumiuk, while Antoni Komasa-Łazarkiewicz wrote the score. The Polish premiere is scheduled for March 23, 2017.