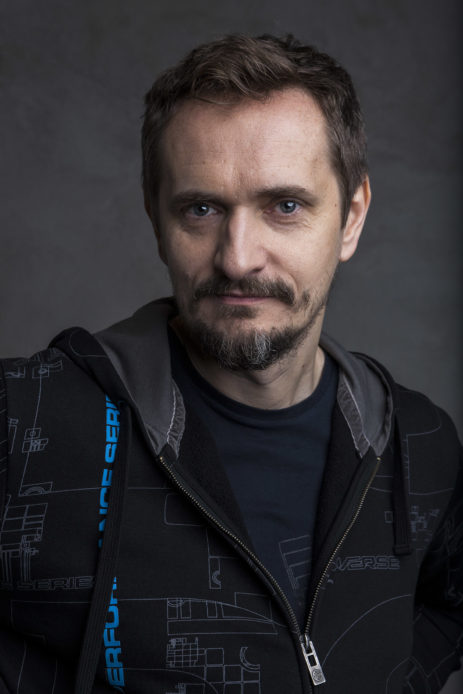 His short “Rabbit à la Berlin” (2009) brought him an Oscar nomination. For “Fear of Falling” (2011) he received a Best Debut Director Prize in Gdynia and was nominated for Discovery of Year by Polish Film Academy. His working on a medieval story,”The Silent One”. Member of European Film Academy.

„What kind of films do I value? I guess the kind in which you can see a reflection of yourself and your emotions, and thus feel less alone in the world” – says Bartosz Konopka. He belongs to a generation that entered adulthood in new, post-communist Poland. He keeps away from politics, stressing that his interest lies in universal dilemmas and sharp psychological portraits of people. Paradoxically, his documentaries reveal a lot about Polish mentality and the transformation. Because you can’t do people justice without showing their social context

Konopka was born in 1972 in Myślenice. Soon his family moved to Dąbrowa Górnicza. His father worked on the design of coal mines, and his mother was a German teacher and orientalist. when Bartek was 12, she went abroad. At first “just” for work, then for good. Her absence will find its way into Konopka’s films. As will his attempts to figure out life with just his father. And then coping with his father’s illness.

As a teenager, Konopka didn’t have any particular interests. He played basketball, and was pretty good at it. He also participated in an amateur theatre run by two foremen from a nearby mine. He even dreamed of acting, but quickly realized that it wasn’t his thing. Then he had the idea to make movies. He experimented with a camera that he had gotten from his uncle from Austria. It was just an impulse, but a strong enough one for him to pursue film studies at the Jagiellonian University. He gave himself time to mature and make important life decisions.

Towards the end of the 1990s, he got a job as a reporter for TVN – “It was my first job, an important experience,” he recalls. “But I still had this feeling that I’m lying to myself a bit, that working at the TV station was like putting on a mask.”

In “Rabbit à la Berlin” Konopka was talking about enslavement, but also about the shock of freedom. This funny but also incisive analysis of totalitarianism was nominated for an Oscar

He got into film school in Katowice. Initially, he dove into documentaries. In 2003, together with his work partner Piotr Rosołowski, he heard about a social assistance initiative: poor families were given goats. They decided to learn the fate of these animals. And through them – of the people who barely made ends meet and who government statisticians decided qualified for this type of aid. The people whom the Polish transformation left behind in the dust.

“Goat Walker” was showered with awards. It stood out among other “difficult” documentaries because of its warmth, humor, and slightly absurdist tone. Konopka spent a long time editing the film, finding refuge at the Wajda Film School. When he was there, Marcel Łoziński pointed him in the direction of his next topic: the rabbits living in the narrow space between the two walls that formed the Berlin Wall that split both the city and Europe into two parts. 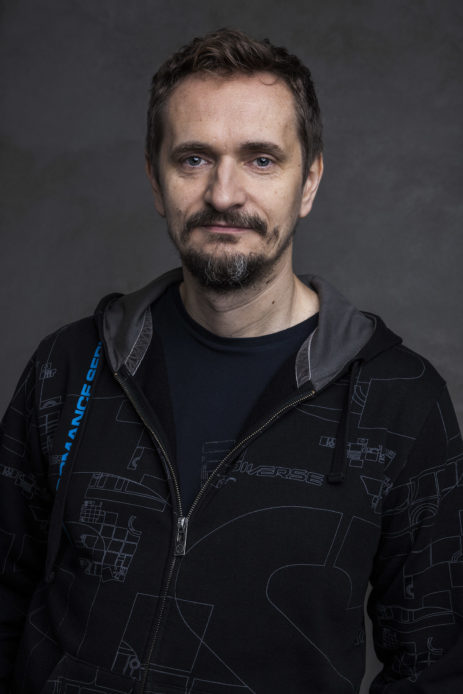 Again, he used an animal’s perspective to talk about society. This time an authoritarian one. In “Rabbit à la Berlin”, which he co-directed with Rosołowski, the rabbits tried to understand the world in which people would die trying to get from the Eastern side to the Western one. Konopka talked about enslavement, but also about the shock of freedom. This funny but also incisive analysis of totalitarianism made quite a name for itself – “The producer, Andźka Wydra, saw how the overseas audience reacted to the film at Hotdocs in Canada, picked up the scent, checked the requirements at oscars.org, and submitted the film,” recalls Konopka. “And the Academy accepted the submission.”

Even just making the Oscar shortlist made them euphoric. Today, Konopka jokes that only after the nominations were announced and his phone started ringing, did he learn how many media outlets there are in Poland. He also realized the promotional power of the Academy Awards. Though the award eventually went to “Music by Prudence” about a band of infirm or disabled musicians from Zimbabwe, Konopka’s film was distributed in Germany and the United States, and found itself part of the prestigious Icarus Films catalogue overseas.

With “Rabbit…” Konopka turned towards creative documentaries. Like “The Art of Disappearing”, which seems similar to his previous project. Here, Konopka and Rosołowski imagined how the People’s Republic of Poland would look like to someone from a completely different culture – a Haitian brought to Poland by Jerzy Grotowski. The outlander analysed Poland’s socialist rites through the lens of his own culture: seeing the “religion” of toilet paper and carpets as they suddenly became available in stores, or the mass “rituals” of harvest festivals.

“The Art of Disappearing” was another film in which our social history was reflected in a less than obvious way. Much like in his next film, the 25-minute “Z łóżka powstałeś”, which featured Professor Leszek Balcerowicz. Konopka also documented artists: Stanisława Celińska in “New Warsaw”, and five cultural bigwigs in “Droga do mistrzostwa”.

Konopka will soon start work on a big production. “The Silent One” is a costume film about the first medieval missionaries

But it was his feature debut, made immediately after “Rabbit…”, that has become his keystone. In the almost autobiographical “Fear of Falling”, he returns to a time that left the biggest mark on him. It tells the story of a TV journalist climbing the professional ladder, starting a family, awaiting the birth of his first child, leading an increasingly safe and stable life. Until he gets a call that his mentally ill father’s condition has deteriorated.

“I grappled with that issue for over 10 years,” says Konopka. “The first time I tackled it was in my diploma film »Czubek«. I was torn by conflicting emotions, but finally decided to be completely honest. I wanted to show that etude to my father. But he was in a psychotic phase at the moment, and the doctor barred me from doing it. It was difficult for me. I made that film to show him how much I loved him, how much I want to help him, how much he means to me. And I couldn’t share these feelings with him.”

After screenings of “Fear of Falling”, moviegoers would come up to Konopka to thank him because they found their own stories told on the big screen. And not just stories of mental illness. Because “Fear of Falling” was in essence a tale of love that runs into a wall and is shattered by emotional disconnect, wasting away as the time passes.

“I’ve done in this film what I never managed to do in my own life,” says Bartosz Konopka. “My protagonist isn’t embarrassed to cry, he doesn’t hide his feelings, he shows his father that there is someone who will fight for him. In my own life, I was too immature and not brave enough.” And so, Bartosz Konopka has finally told the type of story he had always talked about: an intimate and personal one that gets under your skin.

Konopka is currently preparing for a big production – filming the ScriptEast award-winning script for “The Silent One” – a costume film about the first medieval missionaries. It’s a story that borders on myth, and draws comparisons to such movies as Refn’s “Valhalla”.

I ask how he would define success. “When the audience treat your words as their own,” he says without hesitation. “When you stand outside the theatre, look at people’s faces as they leave the screening, and think ‘Yup, they felt something’.”

2013 The Art of Disappearing (documentary)