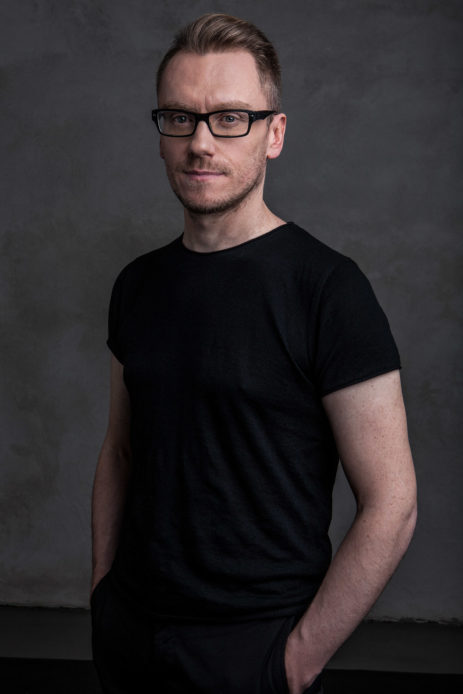 Movie director and curator
of the Museum of Modern Art in Warsaw. His 2015 debut,
“The Performer”, was screened at the Berlinale
and won the Think: Film Award for its “creative use of the medium to grasp and reflect geopolitical contexts artistically.” 2017 will see the premiere of his “A Heart of Love” about a pair of Polish artists – Wojciech Bąkowski and Zuzanna Bartoszek.

His cinematic debut, “The Performer”, had shown that Łukasz Ronduda successfully seeks out categories that merge film and visual arts. His latest, the newly finished “A Heart of Love”, proves that his affair with directing wasn’t just a brief fling

He’s been watching the flows of creative energy between these genres, certain that there’s still much to do for them. A curator and film director in one, he might be the one to blaze new trails in Polish culture. The endeavors of creators like Peter Greenaway show that cinema is moving ever closer to art gallery; just one more step till movies become an element of visual performance. It must, however, be noted that Ronduda accepts the distinctiveness of the language of film, respects its autonomy, doesn’t aim to turn movies, alive on their tapes, into displays in a gallery.

Ronduda is a curator at the Museum of Modern Art in Warsaw. Exercising his passion for cinema at work, he launched the Filmoteka Muzeum film collection. Ronduda also holds university lectures on film history and theory as well as seminars on art history and aesthetics, having collaborated with the prestigious Princeton University and New York’s Columbia University. That doesn’t cover the extent of his interests – having completed his PhD, he wrote several books: Strategie subwersywne w sztukach medialnych, Sztuka polska lat 70. Awangarda, and Polish New Wave: The History of a Phenomenon That Never Existed with Barbara Piwowarska. The director of The Performer also authored over two hundred articles for Polish and international magazines and curated numerous exhibitions, including one at the Tate Modern in London.

Ronduda accepts the distinctiveness of the language of film, respects its autonomy, doesn’t aim to turn movies, alive on their tapes, into displays in a gallery

He completed an accelerated program in film directing at the Andrzej Wajda Master School; his participation in the program was part of a broader strategy of the Museum of Modern Art, which entered into closer collaboration with the Wajda School in part thanks to Ronduda’s efforts. This experience allowed him to study the world of film up close and discover the mechanisms of Polish filmmaking. He appreciates the role of the Polish Film Institute, noting that visual artists lack a similar “caring” institution. Ronduda also recognizes the weaknesses of Polish cinema in the dearth of truly interesting projects ready for immediate production. That’s why he supports newcomers to the cinematic world – their arrival is a breath of fresh air. His protegees included Urszula Antoniak from the Netherlands and, most importantly, Anka and Wilhelm Sasnal, who crossed over from the world of fine arts. Over time Ronduda himself became a creator, successfully exploring both fields of artistic activity.

It all began at the Wajda School when Ronduda was teaching there while getting to know the community of young directors. The school hosts an annual storytelling workshop; as per its agreement with the Museum of Modern Art, the group always includes a visual artist working on their project like the rest of the students. Łukasz Ronduda went there with Oskar Dawicki; they were supposed to work on two chapters of Ronduda’s novel W połowie puste, co-written with Łukasz Gorczyca, another renowned curator, co-founder of the famous Raster Gallery in Warsaw. Dawicki himself – a legendary multimedia artist, performer, photographer, creator of art installations and objects – was the book’s protagonist, though Ronduda and Gorczyca emphasize that the character of Dawicki in W połowie puste is not Dawicki himself – he became a literary persona, semi-fictitious at the very least. 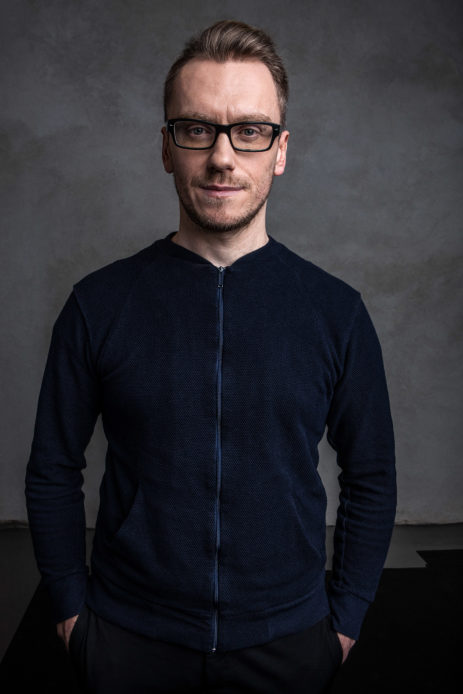 Having participated in the workshop, Ronduda now discourages visual artists from forays into the cinematic realm, unless they’re ready to put in a couple of years of hard work. However, his own passion for movies was undiminished and he didn’t abandon his story about Dawicki. Together with Maciej Sobieszczański, director and screenwriter from the Wajda School, he made The Performer, shot by Łukasz Gutt, equally proficient in the fields of cinematography and visual arts. The movie was laid out as a creative document, akin to the works of Tomasz Wiszniewski or Grzegorz Królikiewicz with their real-world protagonists set in fictional worlds. This was the case with The Performer as well.

A story about life seen through art: “The sense of this approach to the protagonist is compatible with Dawicki’s own functioning in arts. The movie will depict the last stage of his journey and the consequences of his artistic choices – death,” Ronduda announced before beginning production. His project attracted a number of acclaimed actors: Andrzej Chyra played the artist’s rival and former friend, Agata Buzek depicted his lover and manager, and Jakub Gierszał appeared as an art collector. Several members of the artistic community appeared as themselves, including Anda Rottenberg, the former head of Zachęta, and Zbigniew Warpechowski as the dying Mentor, credited as himself.

“A Heart of Love” is a live-action film with a complete screenplay and no impromptu performance art. Ronduda sees it as immersing himself fully in the realm
of cinema

The Performer, recognized with the Think Award in Berlin and considered one of the most original Polish movies in the recent years, is extremely hard to categorize. Ronduda decided to return to the set – he recently completed shooting A Heart of Love about an unusual artistic couple, Zuzanna Bartoszek and Wojtek Bąkowski. Magdalena Cielecka portrays curator Natalia Sielewicz, while Jacek Poniedziałek and Justyna Wasilewska play the leading roles. The director is delighted about working with his actors: “Jacek and Justyna threw themselves wholeheartedly into the project. Bąkowski and Bartoszek were bald, so they shaved their heads too – Justyna even got rid of her eyebrows. The couple wanted to turn their life together into art, making themselves its subjects and dropping all social inclinations. This also became the story about a young girl’s love for a much older man, about freeing herself from his influence while remaining in their loving relationship: thus, a particular version of emancipation.”

A Heart of Love will be screened in the Bright Future section of the Rotterdam festival, followed by the Berlinale’s Forum Expanded. Ronduda sees it as immersing himself fully in the realm of cinema. “Yes, it’s a live-action film with a complete screenplay and no impromptu performance art,” he confirms. But he still wants to remain the link between two worlds – of cinema and of art – seeing them both as his.