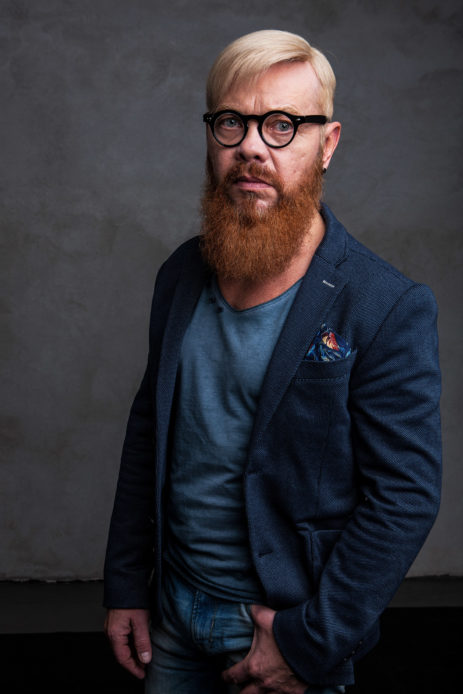 Feature and documentary director, esteemed playwright; Sala’s feature debut, “Mother Theresa of Cats” (2010), was credited as a “bold statement about the dissolution of family and a world devoid of higher values.” In his latest feature, “The Invisibles”, a narrative about a group of seamstresses, Sala once again speaks out on profound social issues. “The Invisibles” will premiere this year.

First he achieved fame in theatre, as an excellent taboo breaker and acute observer of contemporary life. On cinematic field he began his career with documentaries. In his new film “The Invisibles” we face the world of exploited, underpaid sewing room workers, “women that no one notices or no one wants to notice”

Director, dramatist, three time finalist of the Polish edition of the Hartley-Merrill screenplay contest. When, at 52, he made his feature debut, “Mother Teresa of Cats”, critics wrote “one of the most mature Polish films in recent years”, “a great talent in Polish cinema”, “a true auteur”. Their opinion was confirmed by numerous awards – including the “Polityka” Passport (“for a late debut that was worth the wait – for a formally original, perfectly executed and acted piece of work that serves as a brave statement on the disintegration of family ties and a world devoid of higher values”), Gwarancja Kultury (“for a sophisticated formal game, for a new quality in Polish cinema, for mercilessly breaking taboos, for a consistent and polished, original film, for one of the best debuts in recent years”), as well as trophies from Koszalin, Tarnów, and Moscow. And Karlovy Vary, where the Best Actor awards went to the film’s male stars, two young actors at the threshold of their careers – 23-year-old Mateusz Kościukiewicz and 15-year-old Filip Garbacz.

Paweł Sala, who studied culture studies and directing at the Department of Radio and Television of the Silesian University in Katowice, began his career with documentaries. He was usually fascinated by regular people who harbor a secret (“Stygmatyczka”, 1989), idealistically help others (“Miasto wolontariuszy”, 2002, “Siostry”, 2003), but also people rescued from obscurity, as was the case with “Historia z tyskiej butelki” (2003): Sala tracked in it the descendants of the workers who helped expand the Tyskie brewery in 1927 – a list of their names was found in an empty beer bottle during renovation.

Late debut that was worth the wait. A true auteur – critics wrote after premiere of “Mother Teresa of Cats”

For years he worked in television, among other places, but he achieved fame in theatre, as an excellent taboo breaker and acute observer of contemporary life. In his multiple award winning drama “Od dziś będziemy dobrzy”, he presented the hermetic community of a cloister-adjacent young offenders’ home in which the ethics of juvenile criminals clashes with the ethics of the monks who look after them; in “Spalenie matki” – the process of dying in pain that can only be alleviated with morphine. He was often inspired by newspaper headlines: in “Gang Bang” by a competition to beat a sexual record, and in “Zamarznięta” – an actress who stopped coming to rehearsal because, as it turned out, she was lying dead in her apartment. “It’s not enough to just pick a topic up from the street – that’s what tabloids do” – admitted the director years ago. “You need to know which tale is worth a closer look. I’m not trying to reconstruct sensationalist stories. My aim is to use some anecdote, some event, to tell a greater truth. To build a metaphor, and mine these specific events for something timeless.”

Sala’s plays were staged in many Polish theatres. Some he directed himself – including “Heroina” (2006) at the National Threatre, based on a novel by Tomasz Piątek, and “Zamarznięta” (2007) in Teatr Wytwórnia. He adapted his plays for Theatre Television (2004’s “Od dziś będziemy dobrzy”) and radio: including “Umrzeć i już się więcej nie obudzić…?” starring Stanisława Celińska, “Spalenie matki”, or “Kosky i Powska” inspired by the prose of Jerzy Kosiński and Halina Poświatowska. He directed over a dozen radio dramas for the Polish Radio Theatre, including such original productions as “Ślimak na zboczu” based on Tarkovsky’s “Stalker”, and “Don Generał”, which was described as a “somnambulist Dada radio opera”, and starred Ewa Szykulska, Marcin Troński and Henryk Talar, with vocalizations provided by Maria Peszek, Jadwiga Kirschanek and Hanna Banaszak. 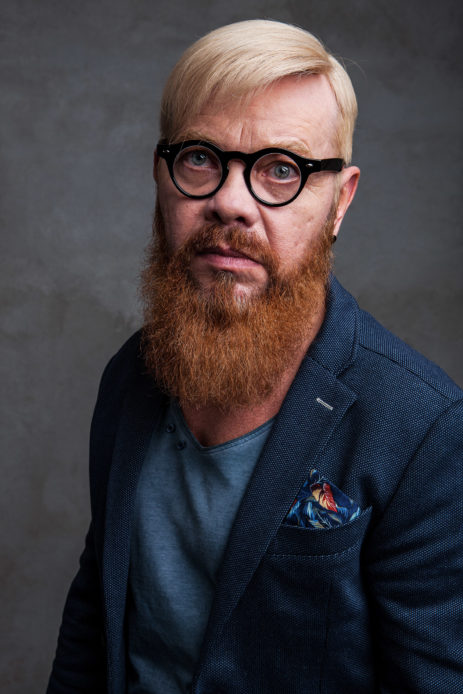 His long-awaited feature film debut, “Mother Teresa of Cats” (2010) surprised from the outset: the film sort of begins at the end – with the arrest of two brothers who murdered their own mother. The director doesn’t show the murder itself, he also avoids providing an unambiguous answer as to what motivated the two men. “I wanted to make something of an anti-crime story” – explained Sala, who was inspired by real life events from several years before, but never divulged their details.

The family home of Artur (Mateusz Kościukiewicz) and his younger brother Marcin (Filip Grabacz) also makes a stunning impression. It is filled with dust and ever-present cats – in fact, the mother (Ewa Skibińska) acts as if she has more warm feelings towards the animals than for her sons and several-year-old daughter. But the key to the murder doesn’t seem to lie in the mother, the absent father, or computer games. The mystery lurks in Artur, who plays a demonic game with his family, anticipates events, is able “enter” other people’s consciousness, and transfer good or bad energy. At least so he claims – in Sala’s film, he is above all an excellent manipulator who turns his deeply buried self-esteem issues into a semblance of power.

“Artur tries to seduce people, possess them in a sense” – admitted the director. “When he is faced with a disappointment, he starts cutting corners. Playing a game. But this game is dangerous to him as well.” The main protagonist of “Mother Teresa of Cats” wages an unnamed war throughout the whole film, in turn feeling like a victim, a tormentor, God himself, or a slave to his corporeality. No salvation is to be found, not even in the pilgrimage on which the mother decides to embark. “In times of utter despair, people try to blindly cobble together some sort of replacement metaphysics” – commented Sala. “But I feel like religion doesn’t work. The world has grown very complicated, and religion still offers the same old answers. We long for something bigger, and at the same time we reduce this longing to something common, almost pornographic in nature.”

“I wanted to tell a story about humiliated, invisible women. And also a story about the contemporary world
of the disenfranchised” – he describes his upcoming project

After the enormous success of “Mother Teresa of Cats”, Paweł Sala spent a couple of years working on several film projects (including an adaptation of Piątek’s “Heroina”) and directing radio dramas. His script for “The Son of Snow Queen”, penned several years ago (in 2002 it made it to the finals of the Hartley-Merrill Contest), is currently being shot by Robert Wichrowski. It will star Michalina Olszańska, Franciszek Pieczka, Anna Seniuk, and Rafał Fudalej. But above all, he was working on his second feature film, “The Invisibles”, based on his play “Szwaczki”.

“I wanted to tell a story about humiliated, invisible women. Women that no one notices or no one wants to notice. And also a story about the contemporary world of the disenfranchised” – explained the director before principal shooting began. The film takes place in downtown Warsaw, but Sala shows a side of the city that is usually unseen: instead of the glass skyscrapers, we see the parallel, “underground” life of basements and sewing rooms.

“The Invisibles” seem to have started out almost as a reportage: the film tells the story of exploited, underpaid sewing room workers, over whom their boss has nearly unlimited power – the more behind he is on paying them, the more dependent the women are on him. In effect, even though the seamstresses barely get by, and are constantly cheated and subjected to mental pressure, they rejoice at sporadically doled out – e.g. before Christmas – advances on their still unpaid, nigh on mythical salaries.

But their example is just a pretext for Paweł Sala to show a unique pocket universe of women who are usually hidden from the view of Varsovians. The film’s protagonists (played by Halina Rasiakówna, Natalia Rybicka, and Sandra Korzeniak) alternate between solidarity and taking out their frustrations on each other. They support, but also compete with each other. They are “invisible” not only because the type of work they do is not deemed to be respectable, but also because they are women – who in Sala’s film are still the most likely to be exploited: economically, legally, sexually, but also symbolically. The philosophical perspective is just as important. “My seamstresses instinctively feel that work is nothing more than delayed death” – wrote the director in his text, inspired by Jean Baudrillard’s “Symbolic Exchange and Death”. He also called work an escape from death, and participation in a social ritual. A ritual that gives you no guarantees, but merely delays the death sentence that awaits us all.

The premiere of the already completed “The Invisibles” is planned for 2017. In September or October of the same year, Paweł Sala plans to begin shooting for his next film, “Autobus”, based on his script from several years ago – this time inspired by the tragic crash of a bus that was taking a group of young schoolchildren to Częstochowa.