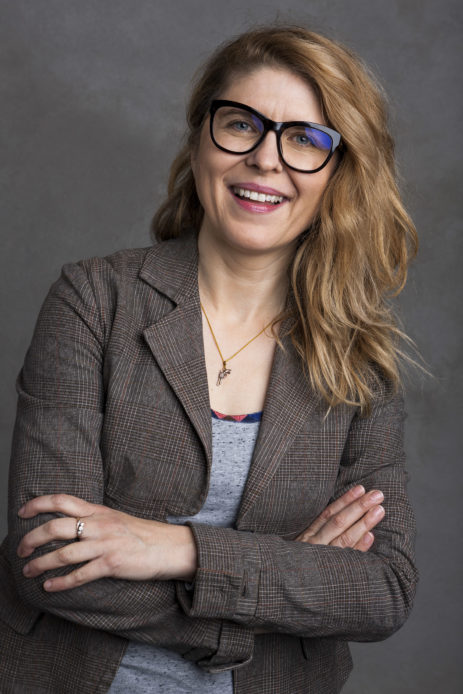 Director, screenwriter and stage designer. While studying she directed full-lengh feature film “Touch Me” (2003) that received Grand Prize at Independent Film Competition in Gdynia and a Golden Duck for best independent movie. Her “It’s Me, Now” (2004) was awarded at Polish Film Festival in Gdynia for Best Debut Director or Second Movie.

Before she found herself at the Department of Directing of the Lodz Film School, she pursued Polish studies and worked as a journalist (covering, among other things, the trials of criminals convicted of murder and rape), and published her first literary work in “bruLion”. It shows in her films, which prove that she is one of the most interesting and original Polish screenwriters. She never offers clear-cut moralizing stories – time after time, Jadłowska shatters the mold of traditional storytelling. She has a great ear for dialogue, and likes to build her characters – especially female ones – using seemingly insignificant details, small gestures, trivial situations and loose narrative ends.

As a director, she debuted when she was still in school, when she teamed up with Ewa Stankiewicz to make “Touch Me” (2003) – without state funding, on a shoestring budget, using borrowed equipment, drawing on the support and passion of everyone involved in the project. “We figured we wouldn’t bang on producers’ doors, tweaking draft after draft. We wanted to make a film right when we had the will and the strength to do it. We threw ourselves into the work at full speed, and it worked” – said Jadowska after the premiere. The film was a watershed moment for Polish independent cinema. Previously, the word “independent” was associated with the amateurish works of passion. “Touch Me” was a thoroughly professional film, but completely independent, uncompromising, and one that bore a strong mark of its author. The film received many accolades – including the main award in the independent film competition in Gdynia, the “Film” magazine’s Golden Duck for the best independent film of 2003, and the Slamdance Poland award in Wrocław for the best feature film.

One of the keys to the work of Anna Jadowska  is a vision of a chaotic, scattered world that  is connected through invisible threads

The protagonists of “Touch Me” seem to be perpetually locked in life’s waiting room: young actors advertise pots on a second-rate cable network, 50-year-old Ewa (ewa Szykulska) argues with her daughter and boyfriend about spam, and young girls from a brothel play dirty tricks on each other. But the film isn’t about poverty and unemployment – its main topic is emotions. Unloved people destroy other unloved people in an endless spiral of dissatisfaction. People seem unable to talk about love (and when they try, they end up delivering laughable platitudes), but neither can they handle it when someone else professes their love for them. And anyway, emotions are intrinsically linked to sensual desires: the film is dominated by a hunger for erotic closeness, for shameful sexual pleasure, for that titular touch.

One of the keys to the work of Anna Jadowska is a vision of a chaotic, scattered world that is connected through invisible threads. That was the case with “Touch Me”, but also with her masterful etude “Korytarz” (2004). Using meandering, sonata-esque storytelling, Jadowska guides the audience into the microuniverse of an old Lodz tenement house. Gray, dirty, stuffy, and sensual – the August heat, and water shortage, underscored in the plot, give the film the feel of a blurry dream.

The director used a similar narrative construct nearly ten years later, in her excellent documentary “Three Women” (2013), in which she returned to the world she knew from her student years. Once again, her protagonists are the inhabitants of a poor Lodz neighborhood, but the teenaged Agnieszka, 20-year-old Małgorzata, mother of two, and 80-year-old Basia who lives with her alcoholic son, are connected by more than just physical proximity. The three women seem trapped by their circumstances, but at the same time they dream of a completely different, fulfilled life straight out of a fairy tale. They are mothers and daughters, but find it hardest to communicate with their family on an emotional level. At the same time, they all exhibit impressive strength that doesn’t allow them to lay down arms.

The director’s attitude towards her protagonists was best summed up by the verdict of the jury of the Magic Hour Award, which “Three Women” received at the 2014 Planete+ Doc Film Festival: “for warm and empathetic observation through which the film invites us into the intimate world of its protagonists without making us feel like intruders, and for the awareness that in documentary filmmaking it’s not enough to just turn on the camera and wait for magic to happen”. 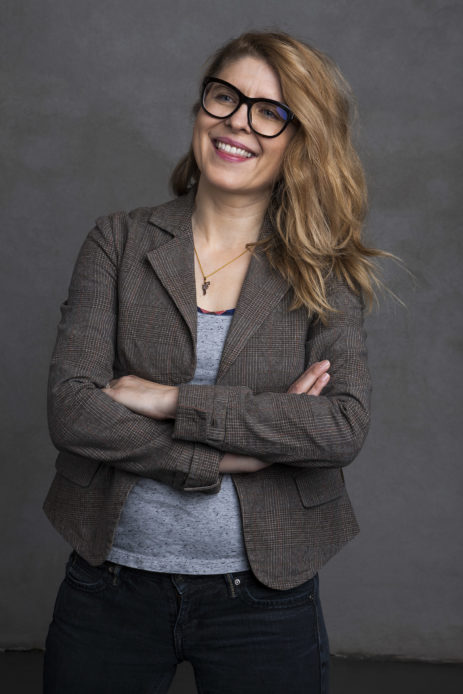 Jadowska likes to surprise us. She worked on several TV series, including “Uwikłani” and “Królowie przedmieścia”. As a screenwriter, she co-created the highly intriguing, both graphically and plot-wise, animated film “Esterhazy” by Izabela Plucińska (based on the book by Irene Kische and Hans Magnus Enzensberger), in which the titular protagonist, a rabbit unaware of the political changes that have transpired in Germany in late 1980s/early 1990s, travels to Berlin to look for his wife. Equally surprising was the television film “Generał – Zamach na Gibraltarze” (2009), which combined archival footage with reenactments, and told the story of the last days of General Władysław Sikorski (Krzysztof Pieczyński) who died in mysterious circumstances in Gibraltar. Jadowska opts in this film (and also in the three-part series she shot at the time) to see the event as an assassination, and even if that version was disproved by the results of the General’s exhumation, which were published after the film finished shooting, “Zamach na Gibraltarze” should be treated as historical fiction – the death of Sikorski appears here to be just as fascinating as that of President Kennedy.

Jadowska was in her youth a fan of Czech cinema. Her signature style is most on display in her feature films. Even though she herself doesn’t like the term “women’s cinema”, her protagonists usually are women – fascinating, sometimes irritating women who terrorize us and sometimes makes us laugh. But above all – women with whom we can empathize.

In her first completely independent feature film, the excellent “It’s Me, Now” (2004), which received the award for the best debut at the Gdynia Film Festival (the script was developed at the Wajda School), she basically created a film without a plot: its starting point is the moment when twenty-something Hanka (Agnieszka Warchulska) leaves her home never to come back. She wanders around Poland, visiting random locations and equally random people, while her confused boyfriend Pawel (Maciej Marczewski) suspects the worst. But even Hanka herself has no clue as to why she ran away, or what she wants to do next – she allows herself to be swept up by events, consciously provoking dangerous situations and letting people manipulate her, as if she wanted to finally feel something.

“My protagonist severs all ties to reality in order to find herself anew, to find out what she needs” – said Jadowska. “She easily succumbs to various moods, she’s by turns hysterical and pretentious. But she also wants to escape the conservatism that is so typical of my generation – we don’t seem to have the ability to live life to the fullest, to enjoy it. And Hanka wants to learn how to do that.”

Jadowska doesn’t like the term “women’s cinema”,  her protagonists usually are women – fascinating, sometimes irritating women who terrorize us and sometimes makes us laugh.

The plot, which won the main prize in the Polish edition of the international Hartley-Merrill script contest in 2005, is quite simple: a married couple decides to make some easy money by starring in a porn film. They aren’t in touch with themselves (or their sexuality), and try to reach their goal by cutting corners. “It’s becoming more and more popular, not just in Poland, to want to achieve something incredible, to taste fame for a moment” – said Jadowska. “My protagonists are unable to make a concerted effort to reach their goals, they look for the path of least resistance. They believe that their lives will change, as if by magic. But that’s not possible.”

Jadowska’s feature films, which she doesn’t make often, bear her distinct mark: the director likes working with unknown or non-professional actors, she often improvises on set, her dialogue is marked with unusual – for Polish cinema – authenticity, and she often finds inspiration for her scripts in real events.

That is also the case with her last film “Wild Roses” (2017) – this time it started with a press article about mothers’ abusive relationships with their children. Jadowska tells the story of a woman who decides to abandon her third baby after giving birth to it. Her husband works in Norway, the child’s father is a teenaged boy from the neighborhood. “It is a film about the essence of motherhood, about its paradoxes, but also about what the society expects from mothers,” – says the director. “I wanted to make a simple, moving, universal film, a big part of which would be played by nature – which can be both beautiful and cruel”.

The film – just like “Out of Love” – stars Marta Nieradkiewicz. It is set to hit Polish screens in September of 2017.