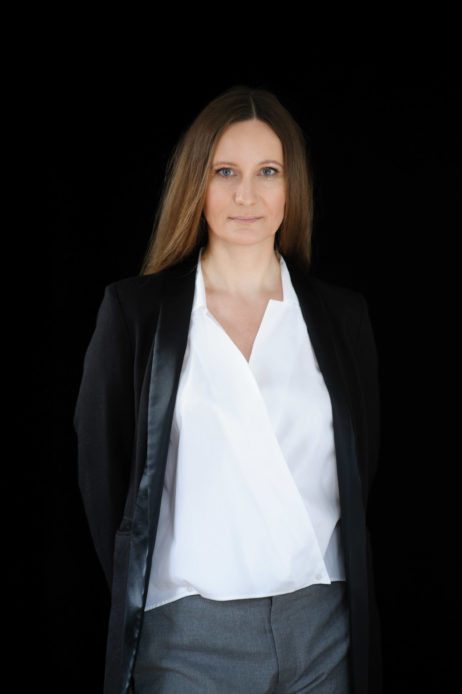 In addition to being a stage and film director, Wieczur-Bluszcz also proficient at directing radio plays. One of them, “Podróż na księżyc” (2014), won the Grand Prix at the Two Theatres Festival in Sopot. Her first foray into feature filmmaking, “Być jak Kazimierz Deyna” (2012), brought her the main prize at the Koszalin festival for “a narrative about Poland brimming with wisdom, warmth, and irony.”

Could a woman really direct a movie whose title references the best football player in the history of Poland? Why not! Anna Wieczur-Bluszcz sees her award-winning “Być jak Kazimierz Deyna” more as a story about growing up in Communist Poland than a football film. “It’s like opening your family photo album,” she said

She doesn’t like to define her profession or specify whether she feels more like a film, theater, or radio director. Wieczur-Bluszcz, already an accomplished creator in each of these fields, intends to keep working in all of them. “I’m lucky to work in storytelling,” she said. “When I find a story, I can choose the toolkit that fits its needs. One tale is best suited to the stage, another to the radio, yet another absolutely has to be made into a film. Being able to choose among these tools is a great privilege.”

She was raised in Wałbrzych – it’s not heaven on Earth now and certainly hadn’t been back then, but Wieczur-Bluszcz feels the city left its mark on her. “On one hand, I kept escaping into all sorts of artistic activity – I performed in a song and dance group, I took music lessons… My house was filled with classical music; even with the limited perception of my childhood years I saw it and my after-school classes as an escape into beauty that was mostly missing from the real world. On the other hand, the Książ castle was basically my playground and the spa town of Szczawno Zdrój was right next door. Kids and teenagers had their secret spots, all beautiful in their own way. Besides, Wałbrzych always was special – it’s a unique place, no wonder so many Polish movies are set in this city.”

She works in film, theater, and radio. Accomplished creator in all of these fields, she intends to keep working in them

She thought about studying conducting, but eventually – almost by accident – decided on the Wrocław branch of the National Academy of Theatre Arts, considering it her best opportunity for well-rounded development. Her choice of department, the Faculty of Puppetry, was a nonstandard pick for an acting student – Wieczur-Bluszcz saw it as a way to exercise her imagination without any constraints, which mattered to her the most. During Prof. Anna Proszkowska’s classes, covering far more than their subject – Puppetry Sets – would indicate, she discovered it was a good decision. These classes expanded the students’ imagination to encompass working with actors, diversity of forms, and even stage lighting. Today Anna Wieczur-Bluszcz admits that Prof. Proszkowska taught her the most important lessons on the profession and imagination.

In Wrocław she met Przemysław Bluszcz, a fellow student at her department. They became a couple. Now, married for many years, they’re perfectly happy to work together.  Przemysław starred in Być jak Kazimierz Deyna and fought alongside his wife to ensure the project would become reality. He also performs in her radio plays – for example as Claudius in her version of Hamlet. “She’s like Harvey Keitel’s Cleaner in Pulp Fiction,” Przemysław laughs. “She only needs a moment to sort everything out and clean it up. Nothing’s impossible for Anna.”

Together they moved to Legnica, where Jacek Głomb and his friends were transforming Centrum Sztuki into the Modjeska Theatre, soon to become one of the most significant places on the country’s theatrical map – the site of world premieres of important modern dramas (including the works of Paweł Kamza and Przemysław Wojcieszek) and the birthplace of the trend to take plays out of theatrical spaces. Legnica brought together many artists, including Janusz Chabior, Marek Sitarski, Marzena Kipiel-Sztuka, and Paweł Wolak. Tomasz Kot sometimes dropped by for performances. “We were involved in theater 24/7. It was like being in a religious order,” the couple agrees.

The future creator of Być jak Kazimierz Deyna was an actress in Legnica, but she already felt the allure of directing: she wanted to be responsible for the whole production. “One time I was watching the rehearsal of As You Like It directed by Robert Czechowski,” she recalled. “Robert asked for my opinion about a particular scene. I started replying… and noticed it just felt right.”

She directed several plays in Legnica (including McDonagh’s The Lieutenant of Inishmore and Molière’s The Misanthrope). Deeply involved with the Modjeska Theatre, Wieczur-Bluszcz felt she wanted to play multiple instruments again and turned to cinema. “I needed a change of language, that’s why I decided on the Wajda School,” she recalled. “I wanted to study cinematography in order to learn camera awareness, but it wasn’t available, so I settled for a year of directing.”

Wojciech Marczewski became her greatest mentor at the Wajda School, bringing Wieczur-Bluszcz into the world of cinema. She understood that this medium is a completely different element, requiring a different approach to work with texts and actors, a different perspective of the story.

Wieczur-Bluszcz met Radosław Paczocha, the author of the stage play Być jak Kazimierz Deyna, at Tadeusz Słobodzianek’s Drama Lab in Warsaw, where she was directing the reading of another of his plays – Scent of Chocolate. He showed her his “football comedy” and asked if she was interested. She was – but she knew right away that she wouldn’t direct it on stage. Making a TV movie was a possibility, but talking it over with producer Paweł Rakowski, they concluded that Być jak Kazimierz Deyna was silver screen material. The producer decided the stage play would have to be slightly rewritten to become a screenplay; the future director did it herself.

The protagonist of Wieczur-Bluszcz’s comedy debut is born on the day of Kazimierz Deyna’s famous curveball score – corner kick goal – in the match against Portugal. The father (Przemysław Bluszcz) thinks it’s a sign: little Kazik (named in honor of Deyna, naturally) will become a football player like his famous namesake. However, things don’t entirely go according to Dad’s plan – as the boy grows, he realizes he’ll need to find his own way in life.

Wieczur-Bluszcz is gathering funds for her next project, “Wszystkie zwierzęta, które są z Tobą” – a story of three families in Poland, Serbia, and Norway.

She populated the set with amazing actors, casting Gabriela Muskała as the protagonist’s mother, Przemysław Bluszcz as his father, and Jerzy Trela as his grandpa. The promising Marcin Korcz debuted in the role of Kazik. The movie won a stack of awards, including Wielki Jantar in Koszalin and Złoty Granat at the comedy festival in Lubomierz.

“It’s an initiation story; I was particularly captivated by stepping into the world of its male protagonist,” said Anna Wieczur-Bluszcz. “However, the possibility to return to my own childhood, its tastes and colors, was even more important. It let me dive into my memories again; working on Być jak Kazimierz Deyna was like going back in time.”

Anna Wieczur-Bluszcz flexes her imagination and talks about unusual people. Over the last few years she became involved with radio dramas, winning the Grand Prix of Sopot’s Two Theatres festival for Podróż na księżyc, a tale about the meeting between Méliès and Lumière. She also received that festival’s top prize for children’s audio play for Tam, gdzie mieszka cisza, performed by the actors of Gdańsk’s Teatr Miniatura. This format also let her tackle Shakespeare’s Hamlet, which Wieczur-Bluszcz considers one of her most important accomplishments.

She keeps searching, as evidenced by her TV drama Krzywy domek scripted by Anna Wakulik, realized as part of the Teatroteka WFDiF with a single 73-minute take. And she feels the time for another movie is drawing near – her next project, Wszystkie zwierzęta, które są z Tobą, is in the early stages of development. The film is meant to show primal familial relationships. “The author of the short stories I based my screenplay on, Boba Blagojević, took the title from the Biblical book of Genesis,” Wieczur-Bluszcz explained. “I’m going to show three families in three different cultures: Poland, Serbia, and Norway. I’m going to ask directly what makes a man.”